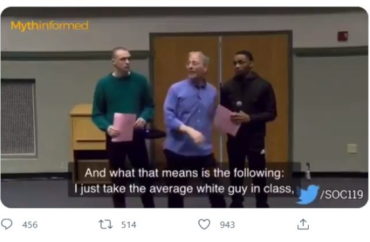 One Penn State University sociology professor’s pedagogy on teaching white privilege is raising eyebrows thanks to a viral video that highlighted it as a troubling example of critical race theory.

The Twitter account “Mythinformed MKE” recently posted snippets from the lecture, as well as linked to the full video of the class, on its feed.

The video snippet featured sociology Professor Sam Richards do a side-by-side comparison of a black student and a white students who achieved all the same scholastically, but the teacher told the packed classroom that in the end, the white student still had privilege over the black student because of his white skin.

Penn State Professor brings a white and black student to the front of the lecture and asks the white student how he feels about his white privilege.

Critical Race Theory pedagogy divides people and assigns worth based solely on race. This plays out the same way in k-12 schools. pic.twitter.com/xTwgrCvESS

The classroom exercise took place in a sociology “Race and Ethnic Relations” class at Penn State as part of its summer school program.

Richards’ bio states that he is “an award winning teacher and sociologist at Penn State University and the instructor of the largest race, gender and cultural relations course in the United States.”

“The course is currently streamed live to the world every Tuesday and Thursday afternoon at http://www.soc119.org.”

Mythinformed MKE, which brought the latest attention to the class, tweeted the video snippet under the comment: “Critical Race Theory pedagogy divides people and assigns worth based solely on race.”

The videos have since gained national headlines, including on Fox News and Twitchy.

Penn State University’s media affairs division, in a statement emailed Tuesday to The College Fix, responded to the viral video in part by noting that “public universities are by their nature a place for the free and open exchange of ideas and information, as well as a forum for debate and discussion that helps to not only create a robust learning environment, but to also promote thoughtful discourse.”

Weighing in on the specific case, the media affairs department stated:

Professor Richards purposefully teaches in a manner designed to promote discussion across a spectrum of opinions. His class is a popular elective, in which each semester hundreds (~800) of students join, bringing their varied perspectives. The class is quite balanced with individuals from different ethnic, gender and political backgrounds. Richards and his course colleagues take time to discuss opinions from many perspectives — from liberal to conservative — and the classroom conversation is framed in a thoughtful way; this is supported in post-course surveys among students who have taken the class.

It is important to note, often on social media short snippets are taken out of a longer lecture/class discussion, and at times taken out of context.

Our hope is that our students during their time at Penn State will be exposed to many new ideas that will help them to form, evaluate and even question what they know.

But others weighing in on the classroom exercise have found it troubling.

“The key to bigotry is taking a generalization and applying it to a random unique individual. Sue this professor,” opined commentator Andrew Sullivan on Twitter.

Podcast host Michael Shermer argued observers should be “outraged by this professor’s perfect embodiment of racial prejudice against individuals but know that this is EXACTLY what CRT argues. ‘On average, race B differs from race W on outcome Z, ergo W privilege’. That’s the theory, with no nuance on WHY such differences exist.”

MORE: The Left wanted a culture war. It got one. Now it’s upset.