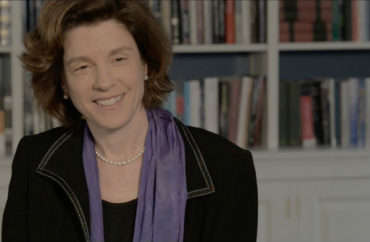 The president of Williams College rebuked the student government after it refused to recognize a pro-Israel student group, saying the College Council’s decision was “made on political grounds.”

In a public letter Friday, Maud Mandel said she was “disappointed” in the council, which failed to abide by its “own process for reviewing student groups.”

The Williams Initiative for Israel, known as WIFI, was the first student group in more than a decade to be denied recognition despite meeting all required bylaws, according to a review of archived council minutes by The Williams Record.

Mandel said the college told the club it doesn’t need recognition by the council to “access most services available to student groups, including use of college spaces for meetings and events.”

But it’s not clear what benefits the club could get solely through council recognition. Greg Shook, director of media relations for Williams, has not responded to emails or calls from The College Fix asking for specificity on the benefits of each status.

The council rejected the club’s application for recognition by a 13-8 vote at its April 23 meeting. Unlike previous meetings, the council did not live-stream the proceedings or identify speakers by name in the April 23 minutes.

It made the decision not to publicize the meeting after the council made national news at another April meeting. The live stream showed black student activists going on a vulgarity-laced rant – including homophobic slurs – against perceived disrespect from white peers.

An unofficial blog on Williams College news, EphBlog, obtained screenshots of the April 23 minutes. They document the second week of an intense debate among “guests” about whether WIFI should be recognized.

(EphBlog says students were blocked from downloading the minutes, but the Record says they were available to “students and faculty with Williams emails.” A link to the minutes from the council’s Facebook page requires “permission” to view.)

The minutes from the April 16 meeting, which EphBlog also posted, showed several students opposing WIFI’s recognition on the basis of its views. Unlike the April 23 minutes, these include the names of participants, though many are quoted only by first name.

Omar Kawam, the student contact for the Muslim Student Union, said the presence of a group “who says they support the [Israeli] government that is currently enforcing those oppressive policies [against Palestinians] seems to be watering down the experience of Palestinian students at Williams.”

Mandel’s statement Friday was actually her second of the day. In an email to the campus community that morning, posted by former Williams College Prof. KC Johnson, the president shared her thoughts about how Williams can build a “healthier campus culture” next year.

The email did not mention WIFI’s rejection by the council, instead referring to Williams’ ongoing problems with “engagement across difference” and “personal attacks” in campus debate.

Johnson criticized the email for its “appeasing language to student critics of free speech principles”  and “one oblique (and neutral) reference to non-recognition of [a] pro-Israel student group.”

This email went out campus-wide this morning from @WilliamsCollege president. Strikes me as very weak–lots of appeasing language to student critics of free speech principles, one oblique (and neutral) reference to non-recognition of pro-Israel student group. pic.twitter.com/61hM0Q9zyj

‘This is not a pro-Israeli government club’

Opponents of WIFI handed out “informational pamphlets about the Israel-Palestine conflict” at the April 16 council meeting, according to the Record. They focused on “the military funding Israel receives from the U.S. and the disproportionately high number of Palestinian deaths relative to Israeli deaths in the conflict.”

The meeting had almost 20 guests, most of whom opposed WIFI’s recognition, though few were affiliated with any specific student group. The council ended up tabling a vote on club recognition.

Yousef Alamassi, who said he was from Gaza, kicked off the discussion about WIFI: “I think it is obvious that the state of Israel – even if not entirely illegal – is doing a lot of things that we should at least talk about and discuss.”

He asked how the group would distinguish itself from Jewish Voice for Peace, which opposes the “Israeli occupation of the West Bank, Gaza Strip, and East Jerusalem.”

Molly Berenbaum, who is starting WIFI, told the meeting that the club “does not take a particular stance on any particular policies or governments within Israel.”

It is not “pushing for any particular strand within Israeli politics,” she said, according to the minutes: “The only ideological claim this group is making is that Israel should exist, and wherever you fall within that you are welcome to join.”

Berenbaum said the club would invite ideologically diverse speakers to campus, celebrate Israel holidays, and engage in political activism “like many other groups on campus.”

The Williams College Jewish Association, where Berenbaum is active, did not respond to emails and Facebook messages from The Fix to get in touch with Berenbaum.

Berenbaum’s explanation did not satisfy the club’s critics. The Muslim Student Union’s Kawam (below) said that “having a pro-Israel group is supporting the right of Israel to continue enacting policies that have been drowning out Palestinian people.”

Another student, identified as Joe, asked Berenbaum to “bring someone to campus who is an arab leftist to talk about the current state of the occupation.” The club should talk about “the human rights abused [sic] happening in Israel.”

Berenbaum clarify that the group was not “defining ourselves in any way against the Palestinians or against Palestinian human rights,” and that WIFI “simply argues Israel has the right to exist like any other country.”

Solly, “the son of an Israeli immigrant” who spoke in favor of WIFI, said “the failure of Israel’s current leaders or their policies do not justify ignoring the horrors of the holocaust that led to Israel being a land for the Jews.”

The club “is here to provide conversations to discuss the importance of having Israel as a place for the Jews,” Solly continued, reminding the council that it “has a responsibility to approve clubs that are currently filling underrepresented niches on campus.”

Linda, who said she works for the college’s multicultural Davis Center, told a story about a Palestinian roommate she had in high school “who cried when thinking about a friend joining the IDF [Israeli Defense Forces].” Berenbaum responded: “This group is not endorsing the current governments of Israel. This is not a pro-Israeli government club.”

The debate shifted into a discussion about whether WIFI would get funding from outside groups. Joe and Jesse asked if the group would accept funding from sources that support “the state of Israel.”

When Solly answered that he did not know where the funding for the group would come from yet, Joe responded: “We would not accept money from a group that lobbies or acts in a way we find to be immoral.”

Students for Justice in Palestine ‘not the same’ kind of club

Before the April 23 meeting took place, the council was concerned about publicly broadcasting the meetings “given a flurry of recent national media coverage of College events,” according to the Record.

The student who took the April 23 minutes said he was instructed by council leaders to keep them “as general and broad as possible.” Each speaker is generally identified as “guest,” sometimes with a number attached.

“The reason I chose this school is because I wanted to have a school where I could express myself and where I could get a liberal arts education … not to be at the same school as a club like this,” said one, referring to WIFI. “The existence of Israel is built on the killing of Palestinians,” another said.

After a speaker said the council had an obligation to recognize WIFI because they had abided by all the rules, another responded that “being voted down is no suppression of free speech.”

Another person asked if there was any other group approved by the council that was a “pro-state group.” When Students for Justice in Palestine (below) was mentioned, the person said it was “not the same.”

As the debate concluded after an hour, a student said they did not want to talk about this issue outside of the meeting “because talking about it normalizes the issue.”

Reviewing the minutes, the EphBlog author who posted the screenshots said it was “stupid” for Mandel’s predecessor as president, Adam Falk, to “change the rules and force student groups to seek recognition from College Council even if they were not seeking funding.”

The rules were changed to “make life more difficult for dissident groups like Uncomfortable Learning,” the author said, referring to the group led by then-student Zach Wood, now a published author. Falk disinvited a speaker the group invited to campus, the paleoconservative John Derbyshire.

The college drew heavy criticism after the vote.

Commentary stated that although the college itself did not “practice viewpoint discrimination,” the Williams administration must ensure the council “doesn’t use its power to ostracize students who think—the radicals—that Israel has a right to exist.”

Academic Engagement Network, which opposes the anti-Israel boycott, divestment and sanctions movement, wrote a letter to President Mandel to urge her “to take immediate action to reverse the decision of the CC and to give WIFI the RSO recognition that it deserves.”

Mandel’s second Friday message filled in the details she left out of the first. Posted on the Office of the President page, the letter said the council had gone beyond its own process, “which at no point identifies a proposed group’s politics as a criterion for review.”

She said the council violated its own bylaws, specifically the “‘Prohibition Against Discrimination in Student Organizations.’”

Unnamed college leaders reached out to WIFI to clarify that it “can continue to exist” with most of the privileges other clubs have, she said:  “This is not a special exception. It’s an option that has been open to any student group operating within the college’s code of conduct.”

Mandel said differences over views “are legitimate grounds for debate, but not for exercising the power to approve or reject a student group.”

After the vote but before Mandel’s Friday letter, WIFI met with faculty, staff, advisors and administrators to figure out how to continue without council approval, Berenbaum told the Record.

She noted Israeli Memorial Day and Independence Day were coming up, and the club plans to mark them with an event. “We’re definitely not going to just dissolve away and disappear.”