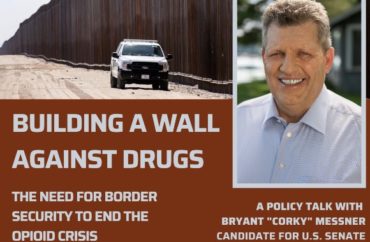 Tweet said community should ‘band together and jump the college republicans’

A day after advertising its scheduled event on border security and the opioid crisis, the College Republicans at Dartmouth College canceled it, citing “mounting security risks from #RadicalLeft ‘activists.'”

U.S. Senate candidate Bryant “Corky” Messner was scheduled to give the Tuesday talk, but the student group said Tuesday afternoon that it could no longer “guarantee the safety of our members” and Messner.

Hanover, the city where Dartmouth is located, is considering a “sanctuary city” bill that would block cooperation with federal law enforcement related to illegal immigration.

CRs Chairman Daniel Bring told NJ Journal that threats were directed against its members but didn’t specify what they were. He said the “security risk has outpaced our capacity to handle the potential protests”:

There’s a large contingent of radical leftists on campus who have descended on events in the past in order to shut down speech they don’t agree with. They pound on doors, rush the podium and harass the speakers. …

The backlash has been so great, we’re not prepared to say we will have the necessary security. …

It’s not just a single comment here or there, it’s the wider situation and the threat of radical, intense protests.

Bring told the Journal that his members have reported specific threats to both campus security and Hanover police. “We had received various threats, such as that Dartmouth leftists were going to ‘jump’ College Republicans at the event,” a “senior member” told The College Fix on the club’s Facebook page.

The member provided only one example, however: a deleted tweet by a user named “lopsided afro boy” that said “dartmouth twitter should band together and jump the college republicans for that email/event. im sure none of them can fight so [sic].” The member said the user discussed being a Dartmouth student in other tweets.

While the member referred to the tweet as “incitement,” it does not appear to meet the Supreme Court’s standard set forth in Brandenburg v. Ohio. The ruling says prohibited speech must try to incite “imminent lawless action” and be “likely to incite” such action. The tweet screenshot shows it was posted six hours earlier, and was since deleted.

“We’re not involved in a criminal case,” the member responded when The Fix pointed to the case law. “We’re talking about whether or not we could reasonably expect potential safety risks at the event.”

The member then clarified that the tweet “led us to anticipate potential violent action at the event.” The Fix emailed Secretary Griffin Mackey to get more details on the club’s planned security presence and threats it had received, as the member had recommended.

Mackey himself told the Journal that the club was unsure what to make of the feedback it was getting. “We don’t know if they were serious [threats] or not, but our first priority has to be an event that’s safe and where people who want to hear our speaker feel welcome,” he said.

The club is predicting campus response based in part on past disruptions of its events, including lectures by conservative firebrands David Horowitz in 2018 and Dinesh D’Souza last year.

“The situation at Dartmouth College is the most egregious example … of this intellectual intolerance” Messner has encountered as he campaigns for Senate on New Hampshire college campuses, he told the publication:

Thanks to the efforts of those agitators who disagree with the planned event topic — the mere topic itself, mind you — we are denied the right to assemble, the right to listen to others’ viewpoints — to even express ourselves. Ironically, freedom of speech is demonized at an institution of higher learning, where expression and exploration of ideas should be exalted, not stamped out.

The New Hampshire College Republicans implied the Dartmouth administration was responsible for creating an environment in which Dartmouth CRs and Messner received alleged threats. It needs to “stand up and start combatting this type of political violence on campus,” the group wrote.

The Fix has asked Dartmouth media relations what role the administration plays in discouraging protests from becoming disruptive or threatening events, speakers and organizers, and how it ensures students with unpopular viewpoints don’t have to pay higher security fees for their events.

MORE: Did a university invent a ‘planned disruption’ to cancel an embarrassing event?