Regular readers of The College Fix are well aware of how so-called “whiteness” can be defined as virtually anything, and be culpable for just about any conceivable malady.

After all, academics have classified whiteness as a disease, an abuse of children, responsible for “all psychic suffering,” and even a sin.

Affluent, progressive Caucasians are big fans of this sort of stuff; why else would they shell out over $22,000 for just pre-K to a school that offers what the Charles Wright Academy does?

As part of its diversity, equity and inclusion program, the pricey private institution near Tacoma, Washington offers a monthly “affinity group for parents” titled “Understanding Whiteness.” Last month it also held “Parenting While White” and “The Importance of Discussing Social Identity with Your Kids” trainings (see flier).

All three are led by the co-founder of the Teaching While White website Elizabeth Denevi, an assistant professor at Lewis & Clark College. Some of Denevi’s published works include “White Fragility in Students,” “Helping Whites Develop Antiracist Identities: Overcoming Their Resistance to Fighting Racism” and “What If Being Called ‘Racist’ is the Beginning, Not the End, of the Conversation?”

The “Parenting While White” workshop discusses the “importance of talking to white children about race,” with Denevi offering helpful tips as well as “mistakes and lessons learned.” This and the social identity workshop allegedly are places where parents can “ask important questions about navigating healthy identity development.”

Denevi and Teaching While White partner Jenna Chandler-Ward say their program deals with how whiteness is “a set of assumptions that is the baseline from which everything is judged [and] what passes for normal.” 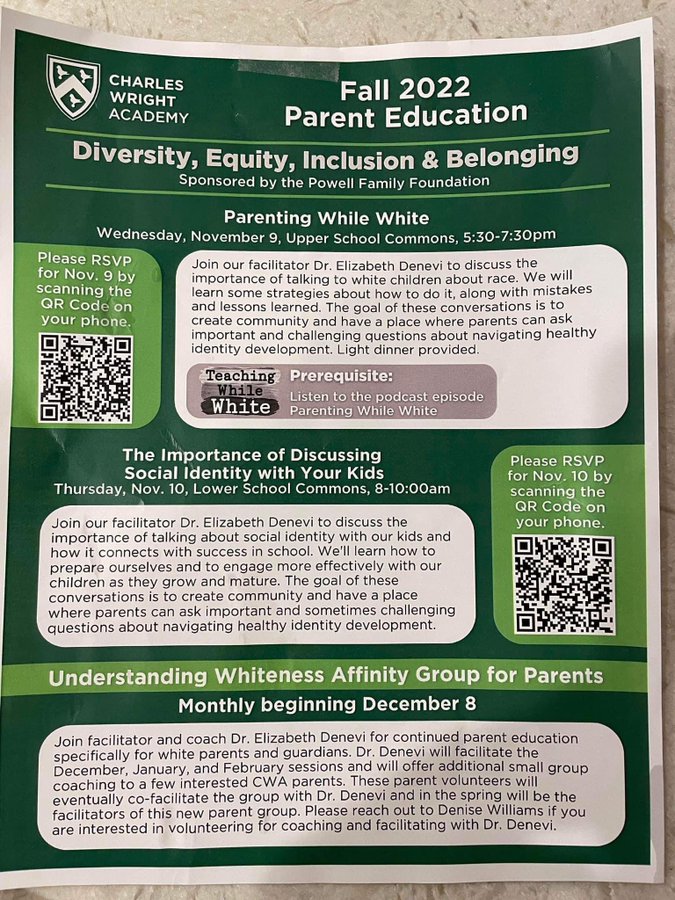 Per Denevi (pictured), these assumptions include:

— “My White identity includes white privilege as an aspect of my whiteness. It is not all, but it is a part of what it means to be white, and I have to be willing to accept this reality.”

— “When I begin to feel complacent, thinking that I have “done” multiculturalism, or if I feel the need to list my multicultural credentials, then I know I still have a lot of work to do.”

— “I do not expect People of Color to thank me or to acknowledge my antiracist work. I consider it my moral responsibility and will not look for validation from People of Color.”

Denevi’s and Chandler-Ward’s “overriding mission” is to answer “critical” questions such as “What are the best practices for making whiteness explicit in classrooms?” “What skills are needed to become racially literate both for teachers and students?” and “How does investigating whiteness in the classroom relieve or create stress for students of color?”

For further study, the Teaching While White site recommends readings such as “A Race is a Nice Thing to Have,” “Waking Up White: And Finding Myself in the Story of Race” and “The Guide for White Women Who Teach Black Boys.”