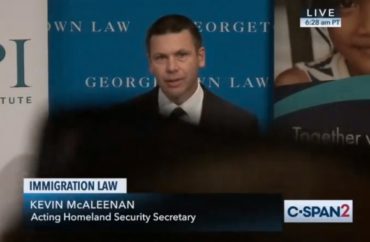 Liberal groups invited him to speak

What remains in question is whether they’ll succeed in escaping identification and discipline for what appear to be clear violations of campus policy.

Media relations for the university and its law school have yet to answer College Fix queries Monday morning as to how they will respond to the shutdown of an event organized by pro-immigration groups and the law school itself.

One of the law school’s own scholars has denounced it for not anticipating an attempted shutdown and letting protesters “hijack” the event.

The keynote speaker for this morning’s annual immigration law and policy conference was acting Homeland Security Secretary Kevin McAleenan, who has recently been in the news for distancing himself from President Trump’s aggressive border policies.

Protesters waited less than 10 seconds from McAleenan’s introduction to start chanting, according to C-SPAN video. They held a banner in the audience reading “Hate is not normal” and chanted “When children are under attack, what do we do? Stand up, fight back!” (They also had a variant “When democracy is under attack…”)

They chanted uninterrupted for about another 50 seconds before event moderator Doris Meissner of the Migration Policy Institute stepped in:

Please, that’s enough now. Thank you very much. We hear you. This is a forum where we respect free speech, we respect your right to protest, but in respect to this audience who wants to hear the speaker, let’s save the rest for the Q&A period.

Georgetown Law’s student handbook expressly tells students “they may not obstruct or otherwise interfere with the freedom of others to express views they reject or even loathe,” but also obligates the law school to “protect that freedom when others attempt to restrict it.”

The shoutdown also likely violated the university’s “incivility” policy, under which students can be charged via “administrative action.”

After Meissner’s polite request to let the acting secretary speak, protesters started reading “the names of children who died at the border under the Trump administration,” according to Politico.

Rather than Georgetown security dragging the protesters out of the room, Meissner said to audience applause: “Please be seated so we can hear the speaker and engage in a dialogue.”

That worked for a few seconds, but protesters started chanting again once McAleenan opened his mouth.

They kept up periodically for another five minutes, despite occasional interruptions from Meissner asking them to respect the audience. She even offered to let them stay standing, but “please stop shouting.”

McAleenan spoke for about 20 seconds, enduring a “bullshit” insult from a protester when he said he spent his career “protecting the right to free speech and all the values we hold dear in America.”

The protesters started again, and Migration Policy Institute President Andrew Selee came to the podium to tell them their actions contradicted their invocation of protecting democracy. (The other organizer was the Catholic Legal Immigration Network.)

“Last time, team,” a clearly exasperated McAleenan said as he took the podium. “There’s some very serious issues we can talk about in candor, in a real dialogue, or we can continue to shout.”

As he tried to take the discussion “above the politics and the daily news cycle” and talk about the ability of the legal framework to handle modern immigration challenges, the protesters started up again, and he left.

Here’s a video of the protesters who disrupted Kevin McAleenan’s speech. McAleenan tried to speak several times and said he hoped to go “above the politics and the daily news cycle.” He eventually left the stage without giving remarks pic.twitter.com/XI734euhj1

Visiting scholar denounces law school for its passivity: an ’embarrassment’

A spokesperson for MPI told Politico the protest was organized by CREDO Action, a progressive group. Its Twitter profile celebrated the deplatforming of McAleenan, and retweeted a claim that Georgetown Law students were involved in the shutdown.

CREDO itself confirmed to The Hill that Georgetown Law students were involved. The group had unsuccessfully tried to get the event organizers and Georgetown Law to disinvite McAleenan.

Some students vocally protested outside the venue, surrounded by several police officers who apparently didn’t think of removing the protesters inside the venue.

An MPI spokesperson denounced the hecklers in a statement to The Hill:

By drowning out the Secretary’s remarks, the protesters deprived immigration attorneys, service providers, journalists, advocates, business leaders, law students, and many others in the public who were in the audience from hearing his point of view and engaging in a meaningful dialogue.

Erica Goldberg, a visiting scholar at the law school’s Center for the Constitution, posted a Twitter thread on “academic freedom and who should speak at universities” after the shoutdown.

She reminded the law school that it knew many faculty and students wanted McAleenan disinvited, and it “should have been prepared for the possibility of interruptions, as this seems to be increasingly common”:

Student orgs/faculty, however, are permitted to invite whomever they would like to speak, as part of academic freedom. …

McAleenan is a career politician who authored but has expressed regret for the family separation policy. Engaging him in dialog would have been so useful.

Instead of letting protesters “hijack events that consist entirely of the exchange of ideas,” Georgetown Law and other schools “should honor their primary goal of education, not social justice,” wrote Goldberg, who teaches law at the University of Dayton.

The law school’s passivity in the face of protesters who claim that hearing opposing views “normalizes” them is an “embarrassment,” she concluded.

Respecting the rights of protesters does not mean allowing them to hijack events that consist entirely of the exchange of ideas and are thus clearly part of academic freedom and free speech values. Universities should honor their primary goal of education, not social justice. (5)