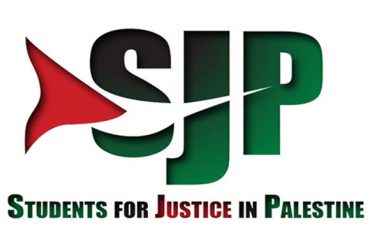 The Hatchet reports the Office of Student Rights and Responsibilities may charge the group due to its actions at an October demonstration where several benches outside the university Hillel building allegedly were damaged.

Hillel had hosted a speaker, a former member of the Israeli Defense Forces, which led to SJP putting up posters on the benches reading “Zionists F*** Off,” “Decolonize Palestine” and “War criminals GTFO.”

The posters were hung via “wheatpasting,” a “mixture of starch and water,” which (allegedly) caused the bench damage. Hillel Executive Director Adena Kirstein said the damage was estimated to cost between $1,200 and $4,500.

Palestine Legal, which is representing SJP, says the wheatpasting caused no damage. According to the GWU Student Organization Handbook, posters can only be hung using “masking or painters tape, push pins or staples.”

Students for Justice in Palestine was joined at the protest by members of Jewish Voice for Peace and other groups. SJP President Lance Lokas took issue with Kirstein’s assertion that SJP was “spreading antisemitism” and “violating the safety of students who view GW Hillel as a home.”

“I have a deep appreciation for free speech and understand that all have a right to express their opinions, even if I disagree with them,” [Kirstein] said in [a] statement, which was obtained by The Hatchet. “But what crossed a line for me was the placement of these signs on Hillel property.” …

Kirstein said the group “attacked” Jewish students at GW with the posters on Hillel’s property, making them feel unsafe.

“Your actions didn’t make any Palestinian lives better,” she said. “But your actions did hurt Jewish students at GW, who felt targeted and attacked.”

Danielle Katz, a member of Jewish Voice for Peace GW, said JVP participated in wheatpasting around campus as part of the postering campaign and other political events with SJP, but their organization received “little to no” disciplinary investigation. She said students have seen “time and time again” that the University has taken continuous action to “silence” Palestinian students and activists on campus.

In a statement, Palestine Legal accused GWU of “selectively targeting” Students for Justice in Palestine, and said any possible discipline “looks like racist, anti-Palestinian profiling [which] the law does not support.”