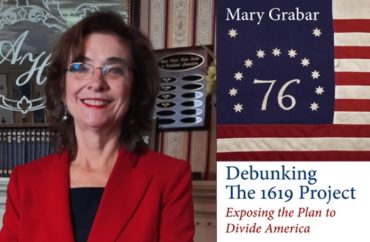 ‘We must insist on the facts,’ Mary Grabar tells The Fix

Historical figures are not all saints but they deserve a fair hearing and to be viewed in the context of the times, a historian and former college professor told The College Fix.

Mary Grabar has written several books addressing how leftists push a false historical narrative, including one about leftist historian Howard Zinn and a second one about the flaws in the “1619 Project.” Regnery Publishing provided The Fix with the updated version of Grabar’s book titled “Debunking the 1619 Project.”

The 1619 Project is a deeply flawed initiative from the New York Times and Nikole Hannah-Jones. It has been widely criticized by historians and required multiple edits and rewrites after it claimed, among other falsehoods, that colonists fought the American Revolution to protect slavery.

Grabar spoke to The Fix about how students should learn about history and the threat of the 1619 Project.

Her new book is “intended to be a resource that explains what The 1619 Project gets wrong and what huge gaps there are in it. What I’ve tried to do is show how much more complicated the story is, especially for Jefferson and Lincoln,” Grabar told The Fix.

She responded to a question about how students and faculty can defend the legacies of individuals such as Thomas Jefferson and George Washington from cancelation.

“But if we have enough informed people—students, parents, school board members, citizens, political leaders—challenging them, their power will be taken away. I hope that my book can help in that endeavor,” she said in her email to The Fix.

“None of the founders were saints, and I would warn against trying to make them out to be saints,” she wrote. “It’s important to teach context, and not only the context of the times, but of the world.”

However, students are not being taught how to approach history correctly, according to Grabar. The 1619 Project is one such example.

I am an advocate of the traditional approach. The student should get a good grounding in history. The reading should be wide. If you are going to analyze slavery in America, you should have an understanding of it in a global context. Of course, historians should use original source material and then interpret that source material as objectively as possible, with an ability to put it into context.

She said the 1619 Project “blithely abandons this standard as it claims to be (at various times) narrative, origin story, a reframing, work of journalism, but in the end the version that needs to be accepted as truthful.”

The ahistorical initiative is popping up in colleges as well. For example, there is the 1619 Project Law School Initiative which “focuses on curricular resources crafted by law school students and their professors to introduce The 1619 Project and spark frank conversations about the legacy of slavery in legal education.” Students in a prison college program are also being taught using resources from the project.

She addressed the controversy over presentism that stemmed from comments by American Historical Association President James Sweet who criticized the 1619 Project.

It goes back to Howard Zinn who “encouraged historians to engage in ‘social action’ and to direct scholarship ‘towards humane concerns,’” Grabar said. “But an honest look at history will reveal that all groups of people—of all races, ethnicities, religions—engaged in cruel practices which we today abhor.”

However an “honest look would take away the ability to use ‘history’ to justify social actions.”

“One could certainly make the argument that racially discriminatory laws were unjust and should be changed,” Grabar told The Fix. “One can make that argument based on principles of natural law and the Constitution and its amendments.”

“One does not need to rewrite American history, as Zinn and Hannah-Jones do,” she wrote. “This indicates that they are not aiming for reform but revolution.”