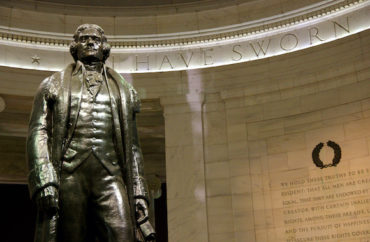 The University of Virginia student paper used the fifth anniversary of the Charlottesville “Unite the Right” rally to demand the removal of all references to school founder Thomas Jefferson.

The 2017 march involving white nationalists (which resulted in one death) became a lightning rod for progressives who used the incident to, among other things, compare due process to Naziism, rip Donald Trump and hold culpable “white society at large.”

The city of Charlottesville ended up canceling its annual Thomas Jefferson birthday celebration, opting instead to repackage the date as “Liberation and Freedom Day.”

In an August 11 editorial, The Cavalier Daily editors write that UVA President Jim Ryan’s recent pronouncement about “the importance of preparing students to be citizen leaders” means the university must “create a physical environment that reflects [a] commitment to equality and [a] disavowal of white supremacy.”

This means an erasure of all things Jefferson — and that of others.

They conclude: “These buildings must be renamed and memorials removed.”

The editors also proclaim all UVA students should be required to learn about the school’s “racist roots” and “Unite the Right” march “over the course of their four years.” They recount how their own publication played a role in maintaining whiteness:

Citizen leadership requires taking accountability. To be clear, we vehemently oppose the previous editorials written shortly before and shortly after the events of Aug. 11 and 12 that ignored institutionalized racism and misdirected blame to inappropriate bodies. In 2017, The Cavalier Daily was part of the larger media system that exacerbated the harmful effects of the “Unite the Right” rally. It would be hypocritical to write this editorial today without recognizing these failures and rededicating ourselves to our mission statement of performing a public service.

UVA thus far has kept its “Founder’s Day” programming (which “recognizes achievements of those who embrace endeavors in which Jefferson […] excelled and held in high regard”) but has since looked at renaming buildings currently honoring those with a “legacy of racial prejudice,” held trainings to “stop graduating racists” and looked at paying reparations to slave descendants.