The University of Minnesota did not cave to a “heckler’s veto” by requiring a conservative pundit to speak in a smaller venue on a more remote part of campus than his hosts would have liked, a federal judge ruled last week.

The public university’s choice of venue, which was “agreed to” by Students for a Conservative Voice, was not motivated by a desire from UMinn to “silence or restrict” the speech of Daily Wire founder Ben Shapiro, U.S. District Judge Susan Nelson wrote. It was a “content-neutral place restriction in furtherance of public safety.”

Quoting a Supreme Court decision, she said the student club, Shapiro and sponsor Young America’s Foundation are “not entitled to [their] own bubble-ensconced pedestal surrounded by chalk lines or yellow tape any more than those opposed to [their] messages are entitled to a heckler’s veto.”

Nelson granted summary judgment to UMinn on the plaintiffs’ First Amendment claim, and upheld qualified immunity for all UMinn defendants, after a two-year legal battle.

Before the lawsuit, YAF pointed to the disparity between UMinn’s treatment of progressive and conservative speakers.

Democratic Sen. Elizabeth Warren (below) spoke in the middle of the Minneapolis campus in a 1,500-seat venue. Shapiro spoke 7 miles away on the St. Paul campus in a venue with a third of that capacity, despite his testimony that he consistently sells out venues of under 1,000 seats. (Event hosts said they received 725 requests for tickets in the first 24 hours.) 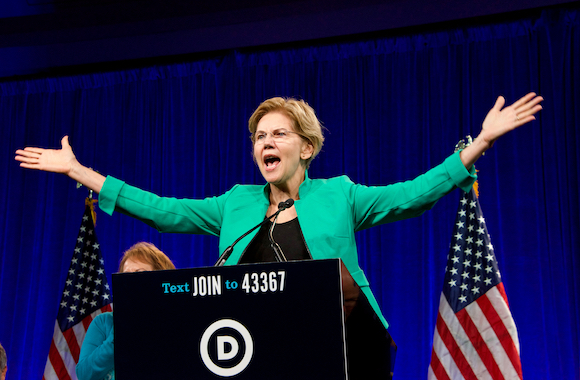 The university declined to explain to The College Fix the logistical differences between Shapiro’s planned event and Warren’s event at the time.

YAF spokesperson Spencer Brown told The Fix in an email that both his organization and their attorneys at the Alliance Defending Freedom “are now evaluating a possible appeal.” His group’s public statement accused Judge Nelson of letting university officials “suppress viewpoints simply because they disagree with those views.”

Students for a Conservative Voice, which invited Shapiro, and the alliance did not respond to queries from The Fix.

Nelson tossed the First Amendment claim in part by using the Supreme Court’s “forum analysis” measure. Given that the venues in which Shapiro could appear constituted “limited public forums,” the ruling held that they were subject to “reasonable” constraints by the university.

She also found that President Eric Kaler did not engage in content and viewpoint discrimination, granting him qualified immunity. Kaler’s statement that he did “not want” Shapiro’s event to be held “in the middle of campus” was based on security concerns, given the president’s knowledge that protests have frequently occurred at other Shapiro functions.

Nelson said there was “simply no evidence that Kaler decreed that Shapiro could not speak on the Minneapolis portion of campus.”

YAF had originally hoped to bring Shapiro to speak on UMinn’s main campus. But as each requested site was shot down by Buhta and Dussault, the student organizers were running out of suitable options.

The conservative organization noted that administrators were reluctant to let Shapiro use a venue near public transit or hospitals that border campus. Other sponsors, including Minnesota Students for Liberty, said proximity to these sites would “risk protestors shutting down roads, blocking trains, or forcing hospitals into lockdown.”

This was not a prospect the university was willing to face, they wrote: “The fascists won that battle” by “promising a violent, disruptive protest.”

While the university accused student organizers of “flat out lying,” their emails raised non-security concerns.

In addition to the provost’s cryptic email, Dussault expressed concern that the Shapiro event would be “protested” and draw “a community reaction,” while Clark, the police chief, put a hard cap of 500 on “crowd size.”

The university put the lecture under its more restrictive “large scale event” policy anyway, which the suit said was intended to “censor, restrict, and inhibit unpopular student speech.” The LSE committee consists of campus police, Student Unions and Activities, and other departments “impacted” by such events.

The policy lacks constitutionally mandated “narrow, objective, and definite standards,” letting university officials use it with “unbridled discretion,” according to the suit.

Judge Nelson found no evidentiary basis for the assertions about the choice of venue. It is “normal protocol” for events that might involve protests or require security to have UMPD and Student Unions and Activities meet with student organizers to “discuss security needs for the event,” she said.

Students for a Conservative Voice President Madison Dibble had “adamantly elect[ed] to move forward with the configuration for 400 seated attendees,” and had at no point expressed “any concern with holding the event” at the St. Paul location, the ruling said.

Nelson made content-neutral distinctions between the treatment given to Shapiro versus high-profile progressive speakers such as Angela Davis (below), a former Communist Party USA candidate whose weapons were used to kidnap a judge in 1970, and Sen. Bernie Sanders.

The groups involved in these progressive events were “not similarly situated” to the conservative student group: The Davis event “was hosted by the University itself, and did not present any significant security concerns,” while the Sanders presidential campaign rally was hosted by “a non-student group” that paid for “excess security costs associated with a move to a significantly larger venue.” 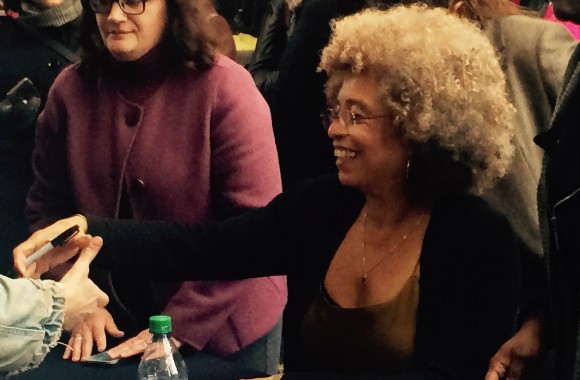 The judge characterized UMinn’s efforts as “due diligence” to ensure that reasonable actions were taken to avoid ratifying a heckler’s veto and “to protect from violence persons exercising their constitutional rights.” She noted SCV worked with campus offices “to ensure the event is hosted safely,” given the “security concerns” around Shapiro.

Nelson cited Clark’s clarification in testimony that his “crowd size” restriction was “based on his understanding, from [Lt. Troy] Buhta, that SCV had agreed that the crowd for the Shapiro event would be approximately 500 people.”

In the end, despite the tumult in securing a venue, Shapiro “did in fact speak … at the University, to a crowd of around 450 people,” the judge said: “His speech ‘went smoothly’ and was not interrupted.” The Pioneer Press also reported at the time that police outnumbered protesters at the Shapiro event.

“Shapiro himself agreed” that he was able to share his views on political matters and answer questions from the students in attendance “all without any violence,” according to the ruling.

“The very fact that Shapiro spoke makes clear that University officials did not ‘allow a hostile audience’ to serve as a heckler’s veto,” while no one involved with the event was required to pay for any of the security costs.

Nelson “failed to respect” the “core principle of both the First Amendment and higher education,” YAF spokesperson Brown said in its response to the ruling.

YAF brought suit because of the “blatant viewpoint discrimination against a prominent conservative speaker,” as shown by UMinn’s actions to restrict the audience that could hear him in person with a small and “inconvenient” venue.

“When universities are able to disfavor viewpoints, everybody loses,” YAF said: “[N]obody should support government officials discriminating based on differing viewpoints with no accountability.”