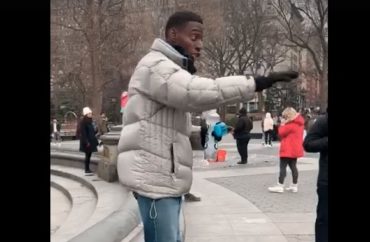 Stop governments from getting away with constitutional violations

When Georgia Gwinnett College threatened a student with “disorderly conduct” for sharing his Christian beliefs on campus, Chike Uzuegbunam sued it for violating his First Amendment rights.

The taxpayer-funded institution revised its free speech policy after being sued, leading the 11th U.S. Circuit Court of Appeals to deem the dispute moot earlier this year.

Now that the Supreme Court has agreed to hear the case, organizations who disagree with each other on everything else are filing friend-of-the-court briefs in favor of Uzuegbunam (above) and Joseph Bradford, a co-plaintiff who alleges Uzuegbunam’s punishment chilled his own planned evangelism.

They include the Foundation for Individual Rights in Education and Cato Institute, ACLU, Council on American-Islamic Relations, Christian Legal Society, Young Americans for Liberty and Becket Fund for Religious Liberty.

The briefs ask the high court to protect plaintiffs’ right to seek “nominal damages” for constitutional violations even when the government – in this case, a public college – changes the challenged policy after the fact.

One group goes far afield of campus by arguing that citizens in all walks of life, especially small business owners, are threatened by the 11th Circuit’s attack on nominal damages. (The phrase refers to remedies for injuries that are not easily quantifiable in monetary terms.)

FIRE and Cato specifically challenge the notion that government entities can escape judicial sanction by changing their policies after a lawsuit has been filed.

Even after a college revises its unconstitutional policy during litigation, it will often reinstate a similar policy after the suit has been dismissed, their brief claims.

California’s Citrus College, for instance, quickly revoked its free speech policy after being sued by a student in 2003, and yet by 2013 it had renewed its free speech regulations. When another student challenged the renewed policy, “the college again agreed to revise it in order to settle the suit,” the groups argue. In 2008, Pennsylvania’s Shippensburg University “readopted the same policies verbatim” that it changed under duress in 2003.

Nominal damages are often the best means available for redress in these situations, specifically to rectify “past violations, not ongoing or potential future wrongs,” according to FIRE and Cato.

They warn that if this remedy can be “mooted just as easily as claims for equitable relief, students will be left with little incentive to challenge unlawful speech codes and other policies and actions in court.” The result is no deterrent to stop schools “from reinstituting unlawful policies.”

MORE: College that squelched student speech under court supervision for a year

The Becket Fund for Religious Liberty argues the “doctrine of mootness” has been strategically abused by large government bureaucracies to dismiss cases that would otherwise not have gone in their favor.

It cited a Florida case where a state prison changed its policy two weeks after an inmate appealed his lawsuit seeking a kosher diet, seeking to moot the suit. The court of appeals denied the motion to dismiss, saying that the one-prison change in policy was “an attempt to manipulate jurisdiction.”

By allowing Georgia Gwinnett College to dodge its own “egregious behavior,” the 11th Circuit broke with the “longstanding consensus” of its sister circuits and invented “a new rule that only compensatory damages will save a case from mootness.” This would require plaintiffs to go through a more stringent process to prove they were financially harmed––which is in no way guaranteed in these circumstances.

CAIR rebuked the 11th Circuit’s decision as a “formula for government abuse.”

The brief notes that governmental entities have been given considerable leeway in comparison to private parties in the presumption that they will not repeat illegal activities. It cites a “nearly 200 year old treaty with the Creek and Cherokee nations” that the United States has consistently “ignored for the better part of a century.”

Letting government officials “moot lawsuits because they swear they ‘won’t do it again’ decimates the protections our laws afford everyone equally,” CAIR argues. “If they really mean what they say, then they should enter into a settlement and consent decree, not seek a dismissal.”

The Christian Legal Society emphasized the religious freedom rights of college students. Upholding the 11th Circuit ruling means that constitutional protections for religious students are disproportionately harmed, a problem that has been rampant across campuses for years, the group said, citing the Department of Education’s new rules on the subject last month.

Their hopes for relief are reduced to “a pipe dream” because they’ll likely graduate before their litigation is fully adjudicated, CLS says: Without nominal damages to sustain their litigation, “religious students would have practically no recourse” for violations of their constitutional rights.

In the briefs by YAL and the ACLU, nominal damages are cited as an effective form of retrospective relief for plaintiffs who cannot easily demonstrate the damage done to them. Even if the award is “just $1, that remedy is still redressing the plaintiff’s past concrete injury,” YAL argues.

The ACLU cites a onetime ban on panhandling in Springfield, Illinois that was later ruled unconstitutional. The ordinance had effectively compelled one individual to give up begging altogether.

While the financial loss to this individual “would be difficult to quantify for purposes of proving compensatory damages,” the ACLU argues, there was nonetheless a “real, concrete harm” done to him by preventing his free expression.

The Pacific Legal Foundation contends that civil rights plaintiffs who succeed with their litigation are “entitled to recover nominal damages as symbolic vindication of their rights.”

It cites multiple lawsuits unrelated to universities, such as a Seattle landlord blocked by the city from using a rent-bidding platform and a Connecticut nail salon shut down by stringent COVID-19 regulations.

These cases show that the nature of constitutional injuries warrant an award of nominal damages in order to be appropriately remedied, the foundation argues.