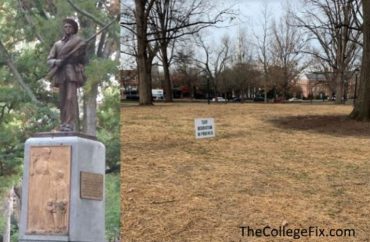 No plans announced yet for space previously occupied by statue

CHAPEL HILL, N.C. — For more than 100 years, a tall bronze statue of a Confederate soldier stood in a grassy quad at the University of North Carolina at Chapel Hill, a controversial monument to the state’s soldiers who died in the Civil War.

Today, that statue and its large concrete base, adorned with bronzed memorial plaques, has been completely removed.

Photos taken Wednesday by The College Fix of the school’s McCorkle Place quad reveal straw spread out across the area where the statue and its pedestal once stood, covering the ground where it was uprooted and leaving no trace. It appears as if the statue, dedicated in 1913, was never there. 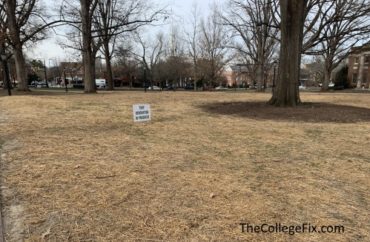 The issue of what to do with Silent Sam had plagued the university since the statue was forcibly toppled by campus protesters last August, who called it a symbol of white supremacy and institutionalized racism.

When UNC Chancellor Carol Folt announced last week she authorized the removal of the bronze commemorative plaques and pedestal, the remaining vestiges of the memorial, she did not include a timetable. It now appears she meant as soon as possible. They’re gone.

The base of the statue was still a threat to students, according to Folt.

“The presence of the remaining parts of the monument on campus poses a continuing threat both to the personal safety and well-being of our community and to our ability to provide a stable, productive educational environment,” Folt stated in a Jan. 14 memo. “No one learns at their best when they feel unsafe.”

The future of Silent Sam’s return to campus is also unclear. A potential plan to construct a $5 million “History and Education Center” to house it prompted demonstrations in the streets, and teaching assistants also threatened to withhold grades if the board did not reconsider its plans.

They did. The history center proposal was shot down in December by the Board of Governors. New recommendations on the statue’s fate are expected to be made by March 15, according to The Atlantic.

As for Folt, her memo to the community not only announced the final removal of Silent Sam, but she also made public her resignation, declaring she would resign at the end of the academic school year. Folt did not link her decision to remove the base with stepping down.

However, the timetable for her departure from the position has been accelerated to the end of this month by the UNC Board of Governors, who said in a statement at the time of Folt’s announcement its members were “incredibly disappointed at this intentional action. It lacks transparency and it undermines and insults the Board’s goal to operate with class and dignity.” 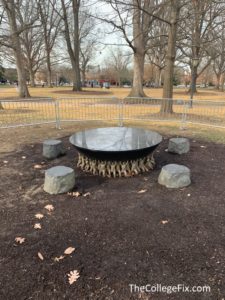 A university spokesperson told The Fix that no plans have been announced on what to do with the physical space in McCorkle Place.

Meanwhile, a monument called the “Unsung Heroes Memorial” remains intact in McCorkle Place. It is currently surrounded by a fence. The rest of the area is covered in straw and soil to grow grass on the area that had been trampled during protests.

The monument, which was dedicated in 2005 as a gift from the class of 2002, displays the words: “THE CLASS OF 2002 HONORS THE UNIVERSITY’S UNSUNG FOUNDERS — THE PEOPLE OF COLOR BOUND AND FREE — WHO HELPED BUILD THE CAROLINA THAT WE CHERISH TODAY.”

A relatively small monument, its location has been a source of criticism from some who said it isn’t visible from far away, according to CNN.