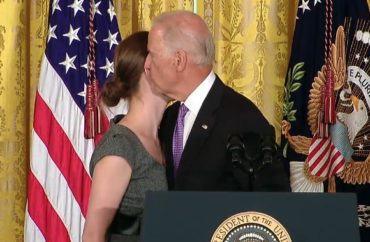 ‘Grounded in the myth that survivors lie or exaggerate their claims’

It’s On Us, the organization that gave former Vice President Joe Biden a platform to compare due process advocates to “Nazis,” is accusing the Department of Education of harming alleged victims of sexual assault.

“I want to acknowledge that a lot of these rules,” outlined in more than 2,000 pages, “are grounded in sexism and the myth that survivors lie or exaggerate their claims,” Vitchers vaguely told a virtual town hall Friday.

Secretary Betsy DeVos’s* decision to release the new regulations during the COVID-19 pandemic – 18 months after proposing them for public comment – was “egregious,” said Valerie Jarrett, who served as senior advisor to President Barack Obama throughout his two terms.

“The administrative nightmare” created by the pandemic “has now been exacerbated by the voluntary actions of the Department of Education,” Jarrett said in opening comments to the town hall. “We cannot let this outrageous action taken by the Trump administration lessen our determination to end this epidemic and protect survivors.”

The Obama White House helped launch the It’s On Us campaign against campus sexual assault nearly six years ago (above).

It started as a collaboration between the nonprofit Civic Action and Department of Education, but ItsOnUs.org removed the federal agency as a partner on Nov. 20, 2018 – four days after DeVos proposed the new rules – according to archived versions of the page that day.

MORE: Biden compares supporters of due process to ‘Nazis’

‘So, so, so problematic’

Jarrett’s comments kicked off the hourlong town hall, which organizers said had more than 1,000 virtual attendees. Many came from organizations similarly hostile to expanded due process for college students, such as Know Your IX and End Rape on Campus.

Vitchers echoed Jarrett, saying it was “cruel” to release the regulations now as students are adjusting to remote learning. At no point in the town hall did Vitchers or anyone else offer praise for any of the new regulations.

The new rules, Vitchers said, are “exacerbating the challenges schools are facing due to COVID-19” because of the department’s decision to require institutions to become compliant by Aug. 14.

Colleges “do not need the addition of implementing new and harmful Title IX rules that frankly the vast majority of them have taken issue with,” she said. (Supporters urged the department to stop delaying release as the pandemic started, arguing that Title IX personnel will have more time to implement the new rules now that campuses are largely empty and sexual misconduct complaints will likely drop.)

Despite cases where accused students of color have filed lawsuits alleging that their institutions showed racial bias in their Title IX proceedings, Vitchers said they are among the groups that the regulation will harm the most.

“While these rule changes are devastating to all students and survivors, it will be students of color, LGBTQ students, students with disabilities and other historically marginalized student populations who will face even higher barriers to support injustice [sic] because of systemic oppressions within higher education that already exist coupled with these rule changes,” she said.

Throughout the town hall, Vitchers simply referred to the new regulations as “problematic” without providing much detail as to why. At multiple times she ended her comments on one particular change by simply saying that it was “so problematic.”

Regarding the standards of evidence allowed by the revisions, Vitchers said that the newly permitted “clear and convincing” standard “signals that students who are reporting sexual violence are less likely to be trusted, and therefore their claims must meet a higher evidentiary threshold than other forms of student misconduct that are reported. This is deeply victim-blaming and frankly so, so, so problematic.”

Some colleges only require a “preponderance” standard, casually known as “more likely than not,” for other forms of student misconduct, such as underage drinking and plagiarism. (Vitchers acknowledged that the regulations allow colleges to continue using preponderance as long as faculty accused of sexual misconduct are judged by that standard as well.)

The “clear and convincing” standard requires that the evidence show that the allegation is “substantially more likely than not” true, according to Cornell Law School’s Legal Information Institute.

Cornell itself judges non-Title IX cases by the higher standard while relegating sexual misconduct accusations to the lower standard. For non-Title IX cases only, several elite colleges either use clear and convincing or require “unanimity” from hearing panels in guilty verdicts, according to the latest campus due process report from the Foundation for Individual Rights in Education. (The vast majority of top schools use preponderance for both.)

Vitchers also took issue with the new regulations allowing institutions to choose to allow mediators to resolve cases. She called it “deeply problematic” because “it has the potential to feel as if the violence a student experiences is being minimized, and survivors may feel pressured to accept less justice than they deserve.”

She slammed DeVos for instituting a requirement for a live hearing with cross-examination, which she said could require a “survivor” to be questioned by a parent or fraternity brother of the “perpetrator.”