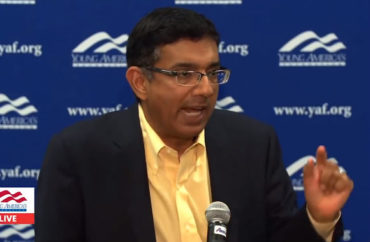 University ‘looking into alternative arrangements’ for event to go forward

Stanford University is refusing to let Dinesh D’Souza speak on campus because the security fee would be paid by a donor, according to the student group that invited the conservative author and filmmaker.

The student government did not answer multiple email and phone queries from The College Fix to explain why it demanded $19,000 for security – more than fivefold greater than the College Republicans suggested – or confirm it required at least half the fee to come from campus sources.

A spokesperson for the administration declined to explain the divergent fee estimates, comment on the alleged donor policy, or answer the College Republicans’ claim that the elite university is trying to keep away conservative speakers by demanding high security fees.

“We are aware of the concerns surrounding the security costs and are looking into alternative arrangements that may allow the event to go forward,” E.J. Miranda, senior director of media relations, wrote in an email.

The Student Activities and Leadership office and Director Nanci Howe, who allegedly imposed the donor-fee requirement, told The Fix to contact Miranda for answers.

“We have been told … time and time again by Nanci Howe,” who also serves as assistant dean of students, that a donor can pay no more than half the security fee, the College Republicans told The Fix in an email.

“We don’t think it’s 100% safe to say that the policy does not exist in writing, but, we cannot recall seeing it, and we haven’t been able to find it,” the group continued.

The Young America’s Foundation called out the Stanford “tyrants-in-training” on Wednesday for throwing up “bureaucratic roadblocks” against the Jan. 16 D’Souza event, part of YAF’s “#FakeHistory Debunked Lecture Tour.”

The CRs had applied for a $6,000 grant from the Undergraduate Senate to help fund the event, with $3,500 earmarked for security, according to a grant application obtained and published by The Stanford Daily a month ago. In a Facebook post, the CRs blamed a “partisan hack student official” for leaking the application.

It was the same request the CRs made a year ago for Robert Spencer, director of Jihad Watch. The student government’s approval of the $6,000 request sparked a campaign to tear down flyers for the “Islamophobic” event.

After the Daily published the grant application, a Jewish Student Association member circulated petitions demanding that the student government not fund the D’Souza event and that the Office of Community Standards investigate the CRs.

Sarah Myers claimed in both petitions that D’Souza “promotes hatred of Jewish people” and threatens “religious freedom” because of various statements he’s made, including a retweet of a post with the hashtag #BurntheJews. D’Souza has said he didn’t see the hashtag in the tweet, which promoted one of his films.

The Jewish Student Association told the Daily it didn’t officially endorse the petitions but said D’Souza “has a history of using his public platforms to disseminate hateful ideas that do not deserve to be elevated on Stanford’s campus.”

The CRs defended D’Souza against the anti-Semitism claims in its Facebook post and claimed that it “has done more to combat anti-Semitism” than any other campus group, citing its efforts against alleged anti-Semites including a student official.

It also countered “myths” with “facts” about D’Souza in The Stanford Review and said the attack on him was par for the course with CR events:

Whenever a conservative speaker is invited to Stanford, leftist activists, pushing their studies to the back of their priorities lists, work incessantly to stop our speakers from coming. Once they fail to deny university approval and funding, leftists change their strategy, working to deny as many students as possible the opportunity to hear conservative ideas.

The campaign against D’Souza worked, judging by the results of Tuesday’s Undergraduate Senate meeting.

“Falling in lockstep” with “leftists’ special interests,” the Associated Students of Stanford University appropriated $16.50 to cover “travel expenses” for the D’Souza event (below) and otherwise denied funding, YAF said Wednesday.

The Student Activities and Leadership estimate posted by YAF puts the total cost of security at $24,370. A column marked “Student Portion” totals $19,104.80, including a 10 percent non-security “contingency fee,” and a column marked “50 Percent Sworn Matching” totals $7,002.

That second column appears to refer to expenses that an outside donor may help cover. The only lines that the CRs may split with the donor appear to be “venue security” ($10,452) and “operations supervisor” ($3,552).

Asked to confirm what the chart fields meant, a spokesperson for YAF told The Fix in an email that the fee assessment “is as confusing to YAF and the Stanford CRs”:

I wish there was a clear explanation but the school is attempting to cloak its anti-conservative bias behind its own bureaucracy and unwritten rules, and that breakdown from the school seems to be more of the same.

In its Wednesday statement, the conservative organization said “a private supporter” of the CRs was willing to pay the “exorbitant” security fee in the estimate (below). The CRs, however, “have been told by Stanford” that half the funding must come from “on campus sources.”

SAL’s page for “off-campus fundraising policy” does not list a specific portion of funding that off-campus entities may contribute to student groups’ events. It only says student groups must have “previously exhausted funding from on-campus sources” and wait to approach “possible sources until university approval has been granted.”

SAL also lays out maximum yearly amounts that may be donated to student groups by local businesses ($2,000), corporations ($2,500) and other off-campus sources.

It allows donations by individuals – such as the “private supporter” mentioned by YAF – “only in rare cases.”  This is because “we don’t want individual students using their own money to fund events,” says the listing for individuals: “Instead seek advice from SAL.”

YAF isn’t convinced that the “funding source” policy given to the CRs is on the books. The spokesperson said it “appears to be yet another unwritten rule used to suppress conservative speakers, ideas, and students”:

The conservative students seeking to host D’Souza have been told repeatedly this rule would apply to them by the Student Activities and Leadership Office, yet administrators have not been able to produce written proof of the policy.

“Once again, the student government and the Student Activities and Leadership (SAL) office are undermining attempts to host just one conservative speaker on Stanford’s campus,” the CRs wrote in YAF’s statement. “SAL has created ‘policies’ that prevent us from paying the massive costs they have imposed on our events.”

The student government provided a different explanation for denying the $6,000 funding request at Tuesday’s Senate meeting.

According to the Daily, Appropriations Committee Chair Gabe Rosen flagged the D’Souza application (below) – a month after its existence became public – because a portion of it appeared to earmark funding for alcohol in violation of Senate rules.

He said the committee made “a bit of an oversight” by waiting until the eve of a block vote on 97 grant applications to single out the CRs’ application, which included a $1,400 line for alcohol. Rosen admitted he hadn’t closely read one of the invoices submitted by the CRs.

Ben Esposito, treasurer for the CRs, told the Daily that the group hadn’t specifically requested funding for alcohol.

Its caterer had included alcohol as part of a standard draft cost estimate, and Esposito had “cleared” the funding request with Katie Hufker, a peer advisor with SAL and former senator. “Hufker did not confirm whether or not she had met with Esposito,” the Daily reported.

“The ASSU is making up excuses to hide the real reason they are suppressing speech: They want to make it impossible for conservative ideas to be publicly expressed at Stanford,” Esposito said.