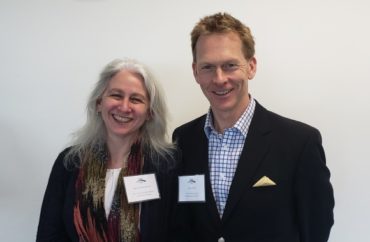 ORANGE, Calif. — Rachel Fulton Brown and Bruce Gilley are among academia’s most hated, both attacked and vilified by throngs of leftist peers in recent years.

In Brown’s case, the University of Chicago history professor has been maligned as a white supremacist and violence-inciting alt-right leader by hundreds of her colleagues after repeatedly championing the goodness of Western Christian Civilization and defending the gay-conservative firebrand Milo Yiannopoulos.

Her troubles began in 2015 with her personal blog post “Three Cheers for White Men” that aimed to tout the role of white men’s support for the ideals of chivalry, consensual marriage, the vote, and free speech. They only got worse when she refused to recant her positions. More recently she’s stood against clamoring among her peers that the field of medieval studies, Brown’s specialty, is too white and needs to be decolonized.

Last April, she was denied a promotion to full professor.

As for Gilley, after the Portland State University professor of political science published in 2017 “The Case for Colonialism” in the peer-reviewed Third World Quarterly, all hell broke loose.

His article analyzed the history of Western colonialism and compared cases of countries before, during and after colonialism. He argued the practice has merit and in many cases has benefited colonized societies in spite of its known downsides on native populations.

This led to petitions denouncing Gilley and his piece that drew upwards of 16,000 signatures, as well as demands for his firing. It was also likely the impetus for an administrative probe he faced right after the controversy (he has since been cleared). What’s more, the controversial article was taken down after the journal’s editor received credible death threats.

One might think that these episodes would have demoralized the two scholars, shushed them up a bit, but quite the opposite has occurred. Indeed, the two sat on a panel on Saturday titled “Heretics,” and said in interviews with The College Fix they have accepted the title in good fun.

The panel was part of the National Association of Scholars’ conference “Disgrace: Shame, Punishment and Redemption in American Higher Education,” held at Chapman University Jan. 11-12.

In speeches during their panel, Brown and Gilley said that while the professional trials they experienced were very difficult, they will not be silenced by outrage mobs. The need for free and fearless academic debate is more important than ever in the face of the Left’s extreme tactics to silence dissent from liberal orthodoxy.

Gilley, in his speech, likened the current situation to the Chinese Cultural Revolution, titling his talk: “Mao Maoing the Right-Deviationists in American Higher Education.”

“I use the term ‘Maoist’ advisedly because actually existing Maoism killed more people than any other political movement in world history. The modern shamers threaten only professional death,” Gilley said. “But their repertoire is most definitely a brass rubbing taken from the tomb of Maoism. People too often assume that violence in Russia and China was the main mode of revolutionary rule. But shaming was cheaper and more effective – why liquidate the enemies of the people when they could be shamed into leaping from the balcony?”

“Medieval inquisitors adjudged such heretics obdurate and sent them to the stake, lest they infect others with their perversion,” she said. “Our modern inquisitors have not yet reached this level of support from the secular authorities … but they are trying.”

“The first step, as we have seen, it to label the heretic clearly, thus placing him or her beyond the pale,” Brown said. “The next is to refuse to have any association with the heretic, as contact could easily be construed as agreement. … The third step is to elicit from the accused clear statements of wrong belief.”

Brown expressed a mix of both pessimism and optimism on the current crisis.

“It is hard to be hopeful about how all this is going to end, but that’s why we’re all here, isn’t it,” she said to the audience, a mix of professors, scholars and higher education watchdogs. “How can we better support our friends, peers and colleagues, who have made themselves untouchable by refusing to submit to the bullies, so we encourage more rebellion in the ranks?”

“I have learned through bravery, perseverance, level-headedness and determination they can be beaten,” Brown said. “I know a lot of people in this room have fought similar battles. But it takes an iron stomach. And most people cannot summon the strength alone. They need backup. They need allies.”

As for personal advice to those fighting such battles?

“It’s not easy to remain defiant when it seems like everyone in your entire discipline is gloating over your impending downfall, but it helps if you can laugh,” Brown said. “…[N]o matter how awful my ordeal, I have kept a smile on my face. I have never let them rob me of my joy, which oddly enough has made my tormentors really very angry.”

Gilley has experienced a personal satisfaction of his own. His “Case for Colonialism” paper has now become assigned reading in some courses, with professors telling him they’re glad at least someone spelled out the argument.

As for stopping the Maoist cultural revolution in academia, he said “change must begin with the everyday public – the parents, the alumni, the taxpayers, and the employers – who are fed up with the mis-education of our youth.”

“[W]e cannot expect university leaders or faculty to be the agents of change because they are part of the problem,” Gilley said, adding change needs to come from boards of trustees, state legislators, state education commissions, alumni associations, groups like the National Association of Scholars, and even the courts.

Saying universities have been repurposed to pursue social justice rather than truth, the antidote is to “reinvigorate pluralism and the search for truth by putting the zealots back in their places.”

For MORE highlights from the NAS conference, check out The College Fix’s Twitter feed.