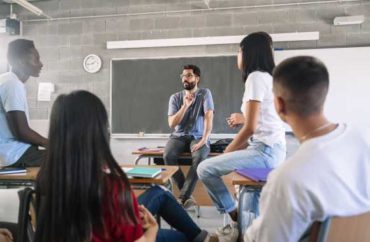 Colleges can become less toxic by focusing on debate over identity

Classroom debates have become intensely personal, given that many acknowledge the personal is political and vice versa.

A Dartmouth College graduate recently penned an op-ed for his alumni magazine arguing against the over-politicization of university life. His advice also points to the necessity of prioritizing argument and reason over emotional reaction in the classroom.

“Academic debates call for hearing and understanding the opposite viewpoint.”

That’s what happens when people consider arguments on their merits, rather than how it aligns them politically or what it communicates about their identity.

University departments, especially those like history or philosophy that consider issues with painful human implications, have a long history (with some unfortunate exceptions) of relying on academic debate rather than political or personal fighting in order to advance research and pursue truth.

In academic philosophy departments, professors still argue for and against contentious issues with some goodwill. This spirit of inquiry needs to be preserved, in spite of – or even because – the issues are so serious.

Here are three ways that the college classroom can keep debates academic rather than personal or political.

Unless you’ve been living under a rock, you know that elite college faculty and students overwhelmingly lean in one political direction, and groupthink silences dissent. This is bad for all thinkers, regardless of ideology, because thinkers and ideas become stronger when they’re tested by opposing views, and weaker when they’re unthinkingly affirmed. Colleges should take the advice of bipartisan organization Heterodox Academy and others and encourage conservative thinkers and other intellectual outliers.

Colleges could make the culture more academic and neutral by favoring arguments over “lived experience” and the quasi-religious invocation of identity. Personal stories can add important context and data points and convey urgency, but the classroom should be a place where ideas are exchanged more than experiences are shared.

Back in January, I wrote about a report titled “Campus Free Expression: A New Roadmap,” released a few months earlier by the Bipartisan Policy Center, a Washington, D.C.-based policy think tank.

Students’ tendency to overvalue perspectives based on experience over knowledge, facts and logic can harm classroom discourse and university culture, according to the report, which was penned by a group of bipartisan scholars and administrators.

To resolve this, professors should teach students to rely on discipline-based norms of evidence, “so that students are neither unfairly burdened with expectations to speak nor excluded because of their experience and identity,” according to the report.

In my view, college teachers and students should reject an epistemology – also known as a theory of knowledge – that stipulates that a person cannot have an opinion on an issue if he is not a member of a directly affected group. This theory of knowledge is pernicious because it silences people capable of contributing positively to a debate.

Just as white abolitionists such as William Wilberforce joined black thinkers in powerfully arguing against slavery, Americans of all races are qualified to argue about race-based affirmative action and related issues. Similarly, men as well as women have made powerful arguments about abortion; they are qualified to have opinions, even if abortion legislation affects women more directly.

Colleges should dedicate themselves to truth, not social justice

“Universities can have many goals…and many values…but they can have only one telos, because a telos is like a North Star,” social psychologist Jonathan Haidt wrote in a September essay in Heterodox: The Blog. “It is the end, purpose, or goal around which the institution is structured”

Haidt argued for truth as the telos of the university to explain why he was resigning from the Society for Personality and Social Psychology. That society now requires all social psychologists to submit a statement explaining ‘whether and how this submission advances the equity, inclusion, and anti-racism goals of SPSP,” according to Haidt.

However, if a university can have only one ultimate value, scholars cannot commit all their research to a goal that might compete. Pursuit of the truth may yield research that undermines the goals of equality, for example. Research into sex differences, for instance, may yield results on innate preferences that might justify unequal representation of men and women in some fields. Haidt argued that a scholar could not in good faith take a pledge to diversity and also commit to seeking truth.

If a college prioritizes social justice, it will foster rancor and division in the classroom because it will privilege the advancement of one group over another. However, if it prioritizes academic debate and truth, it can join diverse students together in a common enterprise.

Slovenski concluded his essay with a call to action: “Restore the brilliant American tradition of academic debating.”

If colleges could foster intellectual diversity, prioritize argument and reasoning, and dedicate themselves to truth, they could restore a culture that is academic, not overly political or personal.

Such colleges would be much more welcoming and less inclined to conflict. They would do a better job of educating students to be citizens, workers, parents, and members of the diverse societies in which they live.