University was investigating her – for what, exactly?

There’s really nothing in this world the regressive left won’t blame on white men. Not even white women passing themselves off as black, Hispanic or American Indian (ahem).

The latest Caucasian outed as something she’s allegedly not – the Mexican-political identity “Chicana” – is Kelly Kean Sharp of Furman University in South Carolina.

An anonymous person from her past at the University of California-Davis wrote a Medium post that said the professor of African American history never identified this way in grad school, but had started doing so on Twitter.

Sharp also claimed her hometown of Encinitas, California, was “majority-minority.” Wrong! they decreed – Encinitas is as white as a Wilco concert, as Queen Latifah once quipped.

The rest of Sharp’s alleged deception isn’t as interesting, though, as two other nuggets in the 1,600-word Inside Higher Ed report on her outing.

Duke University cultural anthropologist Christine Folch, who also weighed in on the Jessica Krug outing at George Washington University, told the publication that the absence of white men pulling these stunts shows their privilege:

“And at the root I think what we see is a competition for scarce resources on the part of those who are not the hegemonic ideal in academia, which remains white male.”

In other words, she said, there’s a competition for inclusion among the historically excluded in academe. And “strategic use and appropriation of brownness” becomes a way to “accumulate more power, more legitimacy, grants, coolness points.”

This explanation doesn’t let the Krugs of the world off the hook, however, Folch was quick to say. That’s because white women posing as nonwhite are using their own white privilege to amass more power “by selectively appropriating brownness and Blackness, as suits them.” It’s a privilege to be able to “selectively choose which aspect and to what degree of brownness one takes on.” 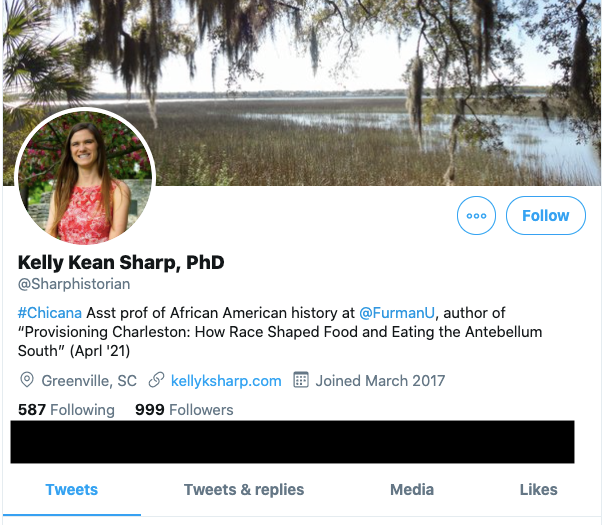 Less controversial to identify as a woman, period

Totally ignored in this analysis, of course, is why white men who start identifying as white women – such as the College of Charleston’s Rachel McKinnon (below), who also dominates women’s cycling – are celebrated rather than vilified for taking academic spots from actual women.

In fact, if Sharp had actually been a man and started identifying as a woman after getting hired at Furman, the private university wouldn’t think twice about it.

Instead, Sharp resigned at some point after Furman announced early Tuesday it was “investigating” her, according to Inside Higher Ed:

Prior to the resignation, [spokesperson Tom] Evelyn said Furman was “disappointed” to learn of Sharp’s alleged actions, and that it expects “members of our community to be honest in the way they represent themselves to others.”

As to whether Sharp presented herself as Chicana in the hiring process, Evelyn said Furman doesn’t ask about candidates’ ethnicity during on applications or during interviews. Sharp was hired “because of her demonstrated qualifications for the specific position.”

This raises even more questions, which I’ve sent to Furman: What was there to investigate? What policy or policies did she potentially violate, since Furman said it doesn’t ask candidates about their ethnicity? How long between your notice that she was under investigation and when she resigned, which could indicate the gravity of the charges?

Most pertinently, would Furman investigate a male professor for identifying as a woman after he was hired – an identity switch that would almost certainly prevent a woman from getting hired? After all, the spokesperson suggested that Sharp’s violation was not being “honest in the way they represent themselves to others.”

Regardless of how a job candidate feels internally, if he is presenting himself as a man in an interview, the hiring personnel will take him at his presentation. By even insinuating that Sharp’s belated Chicana identification is grounds for an investigation, Furman has essentially distinguished between ethnic and gender identification – something that could get it sued. 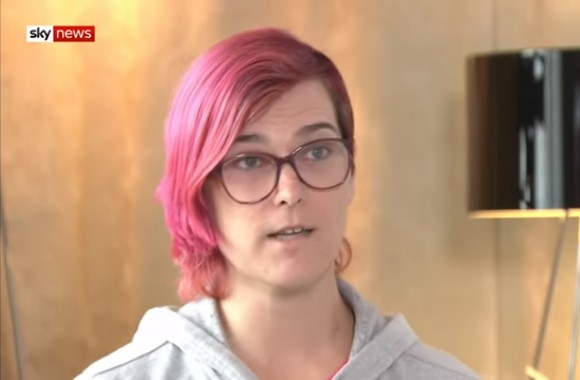 Sharp’s chosen identity of Chicana is also potentially less misleading than that of Rachel Dolezal, the former NAACP official and adjunct professor who passed herself off as black for her entire adult life. (Many Americans my age probably learned about Chicano identity from AC Slater on “Saved by the Bell: The College Years.”)

“Chicana” is a political identity for women who believe they have Mexican descent. It’s intended as a rebuke of the assimilationist term “Mexican-American,” and those who use it show they are “a woke Mexican-American, one willing to fight for la raza,” as writer Natalie Rivera described it:

Much like the fictional AC Slater, I’d guess Sharp was drawn to the political side of this purported Mexican heritage, and like Senator Elizabeth Warren, assumed more than she could prove about her family history.

A grandmother born in Los Angeles could very well have Mexican heritage, even if the family appearance is non-Hispanic white, as census forms say. Sharp herself could pass as a light-skinned Mexican, based on her now-deleted Twitter profile.

And light-skinned Mexicans, you may know, provoke a lot of resentment from the woke hordes because of their perceived cultural privilege in Mexico. I wouldn’t at all be surprised if Sharp wanted to redeem her perceived privilege as a light-skinned person of Mexican descent by adopting the woke label Chicana – showing she wants to fight for “la raza,” as the writer Natalie Rivera said.

Two things are clear from this saga, however: Intersectionality continues to dominate the academy, regardless of how arbitrary the distinctions are. And white males will always be blamed for everyone else’s difficulties.