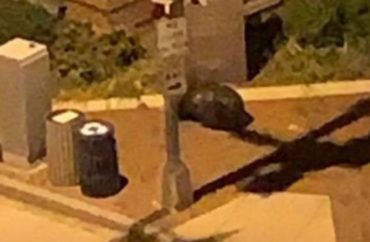 No mention of vandalism; head was simply ‘no longer affixed to its stand’

More than three weeks after its namesake was beheaded on campus, and following pressure from its own professors, George Washington University finally acknowledged the criminal act with a brief statement last week.

A spokesperson declined to comment on whether the private university’s silence encourages students to attack campus structures with impunity, simply pointing The College Fix to the statement released that day.

The beheading of the George Washington statue (above) happened June 1. Student newspaper The GW Hatchet didn’t acknowledge the vandalism for 17 days, when it published a crime log going back to the start of D.C. protests sparked by George Floyd’s death at the hands of Minneapolis police.

Campus police closed the case for lack of suspects or witnesses, according to the log, which titles the incident “Destruction of Property/Vandalism.” It said an officer “found the head of a George Washington statue” laying “at the base” of its stand on 23rd and F streets (below) near townhouses for Greek-letter organizations. “GWPD called Facilities Services following the discovery.” Since the Floyd protests began, at least 30 crimes have been committed on campus, according to the Hatchet, yet the administration has had little to say on the incidents.

The silence implicates a related question: With mounting pressure on colleges to remove the names of historical figures deemed racist, how willing are administrators to defend the first American president as the continuing namesake of the university, whose total cost of attendance exceeds $90,000 a year?

Princeton University removed former President Woodrow Wilson as the namesake of its School of Public and International Affairs over the weekend, citing its former president’s “significant and consequential” racism “even by the standards of his own time.”

“Once tens of thousands of students return to the campus in the fall, it might prove nearly impossible for our small campus police force to detect and to then stop vandalism of the many structures on campus which bear Washington’s name or likeness,” he wrote in a statement following the Hatchet crime log publication.

Even if a “very tiny minority of students” are inclined to vandalize those structures, the simple fact that the campus is full of young people will provide “much greater cover for young outsiders to infiltrate” and wreak havoc on historical symbols, he said.

“If police continue to tolerate open and clearly criminal conduct – as they did last night in D.C., and as they are apparently doing in [the Capitol Hill Autonomous Zone] in Seattle – more statues and monuments in the District and elsewhere could be at risk,” Banzhaf continued.

Update: apparently he was toppled pic.twitter.com/XmX0M92x7a

Banzhaf’s colleague Jonathan Turley, who previously denounced a student effort to remove the university’s Colonials nickname, said he didn’t receive a statement from the administration before the “surprisingly little coverage” of the beheading by the Hatchet. (GWU announced Friday it will formally consider scrapping the “Colonials” moniker.)

“I would have hoped that our university would have denounced this criminal act as a senseless and unacceptable act,” the law professor wrote in a blog post last week.

Turley explained his opposition to the destruction of historical monuments and statues while acknowledging that some should be removed. His primary focus was the responses of universities, from “deafening silence to cringing compliance in the face of such destruction”:

Universities have been conspicuously silent or passive in the face of such destruction.  There seems a fear that any criticism of such attacks will cause a backlash and additional protests. However, such acts create an environment of violence and intolerance on campuses.

It’s not just “public art” under attack, he continued: “We are losing control of our campuses and the preservation of the environment that fosters intellectual, not violent, speech.”

Four days after Banzhaf’s statement and a day after Turley’s, the administration posted a statement acknowledging the beheading for the first time outside the police log.

It did not even describe the beheading of its namesake as vandalism or any other action that intentionally damaged the statue.

“GW staff located a bust of George Washington that was no longer affixed to its stand” but “did not appear damaged other than from the fall,” it said. “This incident did not appear to be a targeted protest against the university, and there were no reported crowds on campus that night.”

The statement implied that the incident was related to “the areas of protest in downtown Washington” stemming from Floyd’s death.

Asked about its three weeks of silence on June 24, spokesperson Crystal Nosal pointed The Fix to the university’s public statement, released the same day. (It’s not clear when the message was posted, as it does not have a timestamp.)

Nosal explained the steps the school is taking in regards to the statue beheading. Contrary to the Hatchet report, the case is not closed, she said:

We took a report and are fully investigating this property crime. There could be a variety of consequences for the person/people involved in a destruction of property, from legal charges to a violation of the student code of conduct.

Nosal did not answer followup questions about why the police log says the case is closed if the university is still investigating, as she said, and whether GWU is worried that its weeks of silence could encourage more vandalism.