There’s no shortage of explicit events being offered this week to Harvard University students as part of the annual Sex Week festivities held on campus.

The student-led, student-organized observance, which launched Saturday Nov. 12 and runs through Sunday Nov. 20, kicked off with what was billed as a “F*ck Fest” lingerie party at one of the Ivy League university’s dorm complexes, Cabot, according to a schedule of events.

Additional events will include a “Pussy Portraits” workshop to celebrate “genital diversity,” the schedule states. A post on social media advertising the event adds students can “paint any genitals you so please,” and the artistic endeavor will conclude with a “sex toy raffle.” 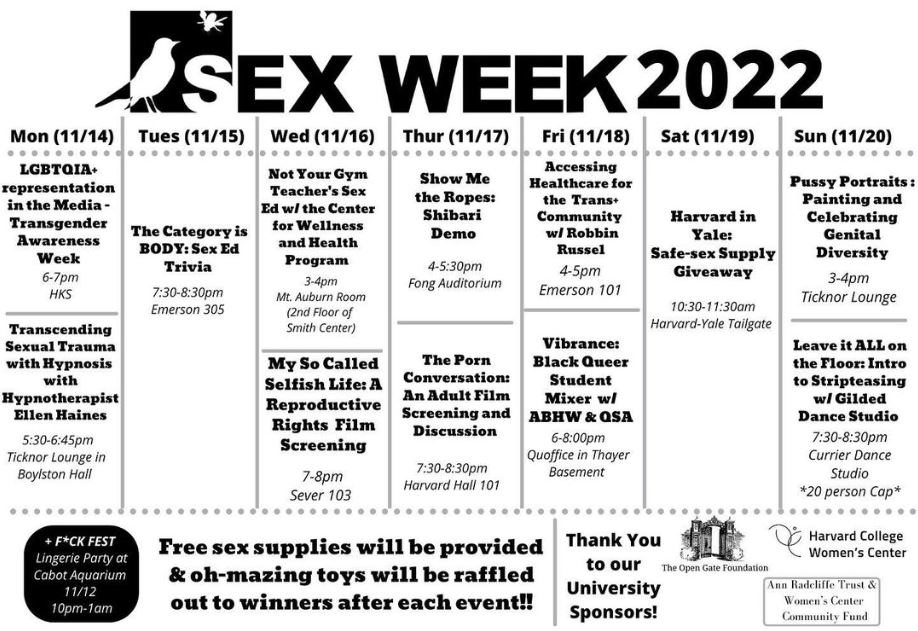 Several events related to transgender issues will also be held.

“Founded in 2012, Sexual Health Education & Advocacy throughout Harvard College (SHEATH) is a student organization dedicated to empowering members of the Harvard community to explore their experiences with love and sex by providing comprehensive sexual education programming on Harvard’s campus,” organizers state on their website.

Sex Weeks continue to be held not only at the Ivies but other schools as well. For example, last month students at the University of Southern California hosted their inaugural Sex Week. They offered a “Sexploration Tent” and a workshop on “plant play” as part of the lineup.