California State University, Dominguez Hills is offering a two-and-a-half-hour virtual workshop on Wednesday for white people only … and other “practitioners of unconscious race bias.”

According to the event description page, the event’s title was purposeful.

“[N]ow is not the time to be passive about racism. It is time for EVERYBODY to be uncomfortable about the time in which we live. What way to bring urgency to the conversation than to remind us what racism really looks like by tying it to a vestige of the past,” the event page reads.

“Being offended by a sign that was pervasive in this society for over 80 years, should bring into focus the events of the past few years. We should be just as offended by our society’s failures to confront these racial injustices. The sign is a stinging reminder of the callousness of racism—the same callousness we’ve witnessed for years.”

This sign said STOP, DO NOT ENTER to generations of excluded people.

It’s happening again today and we must remind society where this can go if we don’t say STOP. People are quick to say they are not a racist, but are they willing to say, I AM “Anti-racist”? Are they willing to actively engage in the kind of discourse, no matter how uncomfortable, that will put an end to racial privilege and racial subjugation? …

This is how we start. Academia is supposed to be the “safe space” to critique and analyze society and social ills. And the historically dominant population can’t shy away from the conversation, nor be offended by the symbols they created out of the desire to discriminate…or stay hidden in the racial discourse. Just because the signs came down doesn’t mean racism stopped. Clearly, it hasn’t. 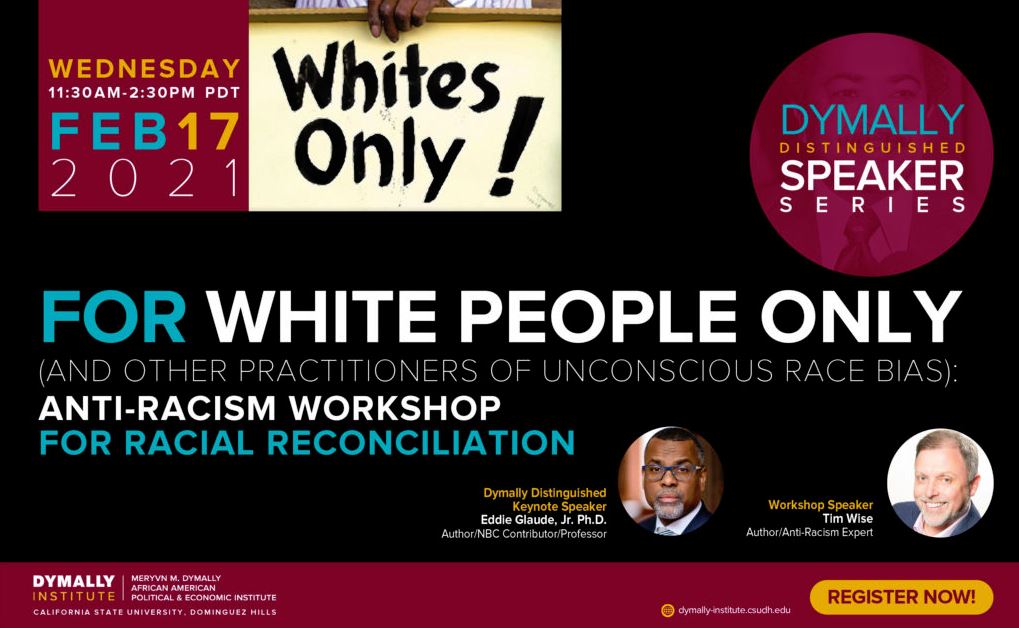 This workshop will be followed by two others — “For Coloreds Only” and “No Negroes, No Mexicans, No Dogs” because these demographics are still “being targeted today in third decade of the 21st Century.”

Readers of The College Fix will know that Glaude and Wise are perfectly suited for such trainings. Glaude has opined that “whiteness” was to blame for the closeness of the 2020 presidential election, a 2019 terror attack in New Zealand, and the alleged attitude of the Covington High School kids. He also referred to former President Trump’s enforcement of immigration policy as “terrorism.”

For his part, Wise has said white people are “mentally weak,” that they lie when they say they have minority friends, and that it’s “frustrating [and] exhausting” trying to get whites to “listen to the reality of racism.” He’s also referred to Christians as “Jeezoids.”