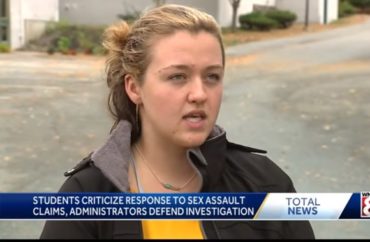 She didn’t name or identify anyone

“Bullying” and “harassment” have some curious definitions in college speech codes. At Pennsylvania’s Gettysburg College, making someone feel “unwelcome” on campus can get you charged with bullying.

For a high school student in Maine, so can calling attention to sexual assault allegations – even without identifying anyone.

Cape Elizabeth High School issued a three-day suspension to sophomore Aela Mansmann last month for literally posting a public service announcement in a school bathroom, according to the Press Herald.

It read: “There’s a rapist in our school and you know who it is.” That’s it.

Nope, making a vague claim with no names was enough to get her charged with “bullying.” It was about as mild an action as Mansmann could have taken:

She said she was trying to draw attention to several incidents of sexual assault over the past year or so that some students felt were being ignored or not properly handled by school officials. Other students posted similar notes and Mansmann said she knew of at least one other student who had been suspended, although this could not be independently confirmed. [Later reports said two others were suspended.] She said Saturday she was “confused” by the suspension for bullying, since she did not name anyone in her note.

“I was really hoping to spark a conversation between students and the administration,” said Mansmann, 15. “I was told someone made a complaint that I was bullying them. So I thought, why is this person self-identifying as the (alleged) rapist?”

Punished for talking to the media?

Though Mansmann posted the note Sept. 16, the trigger for her punishment appeared to be a Press Herald article published Oct. 4, the same day she was pulled out of class and told she would be suspended. (Her parents are appealing, so the suspension is on hold.)

The article reported that the “rapist” note – actually posted in two bathrooms – was preceded months earlier by student complaints about the handling of sexual assault reports at the school.

Mansmann was one of the students who testified at that June board meeting. She’s quoted in the Oct. 4 article as saying that “a number of survivors” at the school have told her they reported incidents “and no steps have been taken” or the administration response “hasn’t been great.”

Her mother Shael Norris told the newspaper that after her daughter admitted posting the note, the administration assured Norris “as late as Sept. 26” that Mansmann wouldn’t be “formally punished.”

It’s hard to reach any other conclusion than that this 15-year-old girl was punished for talking to the media, though one other explanation is that she wouldn’t rat on other students:

Norris said that Mansmann had been questioned by school officials and police on three occasions between Sept. 16, when Mansmann posted a note, and Sept. 26. Norris was at two of the meetings and said school officials wanted Mansmann to identify the other students who posted notes in two school bathrooms about a rapist. Norris, a co-founder of the national sexual assault prevention group SafeBAE told school officials she supported her daughter’s decision not to name other students.

The school maintains there is no rapist in the school, though the school district investigated eight Title IX claims last year and found violations by a preponderance of evidence in half of them.

As for the bullying charge, the school’s explanation probably would not pass muster even under the Supreme Court’s Hazelwood precedent, which sharply restricts the First Amendment rights of K-12 students.

Superintendent Donna Wolfrom told News Center Maine that the students should have gone through “the proper channels,” which ignores Mansmann’s criticism that accusers did that already:

“We are willing to listen to our students … [The sticky notes] caused a lot of confusion. We spent a lot of time investigating. It had adverse effects on other students. I think there could have been a better way to do it.”

“Adverse effects on other students” is simply too speculative to punish a student for exercising her rights on a matter of public interest. (Mansmann says she was told “someone made a complaint that I was bullying them.”)

The district used circular reasoning to defend punishing students for speaking out, writing in a statement that it is “required by law and by school board policy to investigate and take prompt action” when “a student’s speech bullies another student.”

Mansmann’s mother, who has already contacted the ACLU for help, is questioning whether her daughter’s admitted behavior comes close to the school’s definition of “bullying,” however.

She notes that it mentions “a pattern” of conduct, though the policy also says bullying “is not limited to” a pattern of conduct, giving administrators wiggle room to punish Mansmann. (The Supreme Court’s Davis ruling on harassment in educational settings has a similar threshold: harassment must be “severe, pervasive, and objectively offensive.”)

A high school student posts a note in the bathroom: "There is a rapist in our school, and you know who it is." No one is identified, but she's disciplined for "bullying." https://t.co/UYDIrwDXRQ Once again, school disciplinary secrecy benefits schools, not students.

‘The wrong way to raise such concerns’

In response to media attention, the school has gone nuclear.

Principal Jeffrey Shedd sent a rambling letter to parents Wednesday that connected recent threatening calls and emails the school received to the “really bad choice” made by three students (apparently Mansmann and two others she refused to name) to post the “rapist” note.

He lauded the “heroes” who reported the notes to administrators because “they knew posting notes in the bathroom was the wrong way to raise such concerns.” (How this amounts to “bullying” is not mentioned.)

Over the course of the next few pages, he explained the investigation the school launched to determine if there was any merit to note’s claim.

It did 47 interviews and confirmed that the claim was not related to a closed legal matter from the previous school year. The school also uncovered and debunked a few rumors. Shedd then made reference to “the young man who was the target of the sticky notes,” saying he missed eight days of school. His family said it “felt like bullying.”

The principal does not explain how notes that do not accuse a specific student can “target” an individual or amount to “bullying.”

He even blames the public attention for making school staff censor themselves – “they have been walking on egg shells … worried that what they say could be misinterpreted” – seemingly oblivious to his own administration’s punishment of a student for misinterpreting what she said.

And then Shedd has the gall to talk down to Mansmann and her peers by saying he is “sure” they “regret their choices,” which he claims “hurt” people.

He condemns the media for finding it newsworthy to report on student complaints about the handling of sexual assault claims:

To the adults, including adults in the media, who are giving credence to the sticky note assertions made with zero support in any findings following a school or legal investigatory process, shame on you. You are passing along rumors as if they were established fact. They are not.

This is an amazing straw man. I have yet to see local media coverage that takes the “rapist” claim as settled. Students are being students, not courts of law. They accept allegations as true (and it gets worse in college). They make allegations that may fall apart or be based on rumors.

The school is at pains to convey how carefully it investigated, and it’s to be commended for that. But running a comprehensive investigation does not give Shedd or any other taxpayer-funded bureaucrat carte blanche to demand that students or the public stop criticizing officials for their choices.

He suspended a student for making a vague and nameless claim, calling it “bullying.” That’s worth condemning.

I’m guessing Shedd’s bluster will fade when he actually faces the ACLU in court.