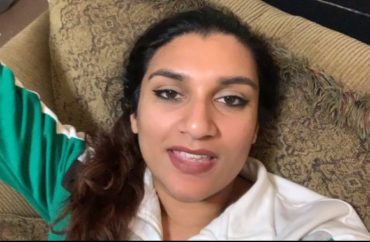 Among her demands: Stop smoking during meetings

Did you know you can have a rewarding career as a journalist while engaging in political activism on subjects of your publication’s coverage?

I’m not talking about mainstream reporters who barely veil their bias in reporting. There’s actually an editor at The Harvard Crimson whose thirst for blood was not slaked by her first scalp – the faculty dean of Winthrop House, Ronald Sullivan, whom she got fired for representing Harvey Weinstein in court.

Danu Mudannayake is at it again, leading the charge against the 143-year-old Harvard Lampoon because it offended her.

If you’re aware of the Lampoon‘s history, which was incorporated into a Will Forte comedy last year, you know that offense is often the point.

The Crimson – which continues to employ Mudannayake as a design editor, even as she keeps appearing in its news coverage – reports on a petition she started against the Lampoon because of a joke it made about Anne Frank.

The depiction of Frank is exactly what you’d expect from the humor magazine. It puts her face on a busty blonde bikini model, with the headline: “Gone Before Her Time: Virtual Aging Shows Us What Anne Frank Would Have Looked Like if She Hadn’t Died.”

MORE: Mudannayake accused of racism for caricature of African-American Sullivan

It closely resembles the “sponsored” section of a newspaper or website that runs low-quality ads for health and cosmetic products and services. That was probably the point. (The Crimson decreed the depiction was “anti-Semitic,” which is a stretch.)

The depiction offended a lot of people, particularly for “sexualizing” the Holocaust victim, who died at age 15. But Mudannayake couldn’t let someone else take the lead on organizing offense.

She had to create the petition, now approaching 700 signatures, that demanded the Lampoon publicly apologize for existing and put its staff through politically correct training, and for Harvard to revoke Lampoon access to “funds and meeting spaces” for student groups:

This is not the first time that the Harvard Lampoon has produced and publicly distributed deeply offensive remarks. The recent issue also trivializes suicide, 9/11, and school shootings (which seems particularly egregious given the Lampoon’s decision to host the Parkland survivors in their castle last March). Administrators at the Dean of Students Office reportedly met with Lampoon earlier this semester to raise concerns about their Crimson parody issue, which contained flippant content about “suicide forests,” an “Adolf Hitler memorial room,” and sexual assault.

This incident is directly connected to a entrenched culture of racism, misogyny, elitism, and hazing that has defined the Lampoon in recent years.

Among her more ridiculous demands – and there are many – Mudannayake orders Lampoon editors to stop smoking during meetings for prospective staff.

Because one Change.org petition is never enough for the egomaniac Mudannayake, she also insists that the Lampoon host at least one public meeting each semester “outside the castle” (its famous headquarters) so scolds like her can air their grievances in public.

If you want more evidence that Mudannayake is an egomaniac, look at the 20-minute video she made while she was trying to get Sullivan kicked out of Winthrop House. It’s Beto-level self-importance.

This is not someone who should remain on staff in any capacity at Harvard’s main student newspaper.

Her petition also wasn’t satisfied with the Lampoon‘s “flimsy” apology letter for the Anne Frank depiction, which pops up on its website.

“We realize the extent of offense we have inflicted and understand that we must take responsibility for our actions,” said the letter, signed by issue editor Liana Spiro and co-presidents Nicholas Grundlingh and Jack Stovitz. “We are sorry for any harm we have caused”:

Moving forward, we will approach the content of our magazine with greater care. We realize that our publishing process lacks sufficient editorial oversight, so we are going to restructure our review process for issues to prevent the publication of content like this. In the coming weeks, based on conversations with the Office of Diversity Education & Support, our Graduate Board, advisors, and our peers, we are going to come up with a series of further steps to improve our publication and organization as a whole.

If the Lampoon is really taking its cues from Harvard’s diversity politburo, Mudannayake has already won. The Lampoon will no longer be an original humor publication, but rather another banal political screed like Stephen Colbert’s Late Show and Samantha Bee’s Full Frontal.

Yet Mudannayake told the Crimson – which continues to employ the activist and frequent subject of its coverage – that she’s just getting started with the Lampoon: She “hopes to organize more around the issue in the fall.”

She’s not the only one. Student Gregory Lipson told the Crimson Harvard should “start an investigation into the organization and its culture, and only recognize the group after it demonstrates real institutional change.”

It wouldn’t be surprising if the fascists who run Harvard bow to this pressure. They already blacklisted single-sex organizations for supposedly being hotbeds of rape (their evidence has been debunked) and then for not being inclusive (a joke coming from elite Harvard). This killed all sororities at Harvard.

They already dumped Sullivan, who remains a Harvard law professor (until a less fascist university makes him a better offer), on the specious grounds that Winthrop House had “climate issues” under his deanship, rather than admitting it’s unacceptable for him to represent Weinstein.

It would be entirely in Harvard’s censorious character to regulate the 143-year-old Lampoon until it’s just another agent in Harvard’s sprawling bureaucracy of wokeness.