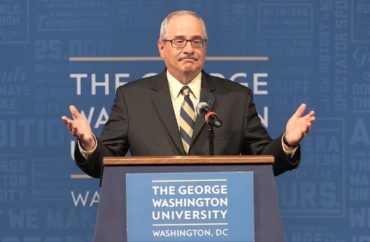 President Trump is often criticized for saying he could get away with shooting someone on 5th Avenue in New York.

A Facebook undercover video posted Saturday shows a first-year student confronting LeBlanc on campus about her passion for “climate justice.” The GW chapter of the Sunrise Movement, an aggressive environmental cult that utilizes children to spread its doomsday message, later identified her as a member, according to The GW Hatchet.

LeBlanc told the student that the university was “working on” exiting the 3 percent of its endowment that’s currently invested in fossil fuels via broader funds. (The student government asked the university to completely divest last week.)

He explained the concept of academic freedom to the freshman, who had objected to the university’s Regulatory Studies Center for its funding from the Charles Koch Foundation* (which also funds historically black colleges):

It was a legitimately founded academic organization here on campus. I can’t shut down everything you disagree with. … Here at GW, you get to make your case and people get to listen to it and agree with it or disagree with it and make another case.

LeBlanc also noted that GW’s Jonathan Turley, recently in the news for arguing against Trump’s impeachment, is a “legitimate law professor.”

If he were to fire Turley as some people have advocated, and shut down the Regulatory Studies Center, “we’d all be in our own little happy bubble, and students wouldn’t be exposed to multiple views,” and “I wouldn’t have a university anymore.” It would also mean stifling the views of students who disagree with the Sunrise activist, he said.

Pressed on how he’d respond if a majority of students agreed with shutting down the Regulatory Studies Center, LeBlanc responded:

Doesn’t matter. What if the majority of the students agreed to shoot all of the black people here? Do I say, “oh, well, the majority voted”? In this country we have rights, and one of the rights is free speech and academic freedom, and I have to defend that.

The author of the “Overheard at GW” post falsely characterized LeBlanc’s response as “comparing students wanting fossil fuel divestment to students wanting to ‘shoot all black people on campus’ on the first day of Black history month.”

The Hatchet repeated the false characterization, even though it’s clear LeBlanc is making a point about minority rights, whether ideological or racial.

The student government’s Black Senators’ Caucus called LeBlanc’s defense of minority rights an example of “a pattern of racially insensitive behavior” on campus and “proof” that “accountability and reasonable sensitivity are absent” from the university.

Sunrise GW added that LeBlanc was comparing “basic academic integrity” – shutting down an academic research center because some students don’t like it – to “student support for racial violence.”

LeBlanc issued a groveling apology to the Hatchet and later posted it publicly, saying he used “an insensitive example that I realize could be hurtful to members of our community”:

“The point I was making – that majority rule should never suppress the human rights of others – was obscured by the example I used,” LeBlanc said. “I regret my choice of words and any harm I unintentionally inflicted on a community I value greatly.”

Student activists and student leaders at GW, aided by the Hatchet, have a history of crying racism when they see bad or inside jokes, and otherwise assuming the worst when they don’t understand something.

Outrage ensued when a sorority leader shared a photo of a “plantation gift shop” with the caption “I wonder if they sell slaves.” The student government hosted a blacks-only student forum in response. In its coverage of LeBlanc’s apology, the news side of the Hatchet still characterizes that off-color joke – based on the setting of the photo – as “racist.”

The student government threatened to bring campus to a halt if the administration didn’t expel a sorority because someone shared a photo of a sorority sister holding a banana peel, with the caption “Izzy: ‘I’m 1/16 black.'”

LeBlanc brought this on himself two years ago by bending to the demands of student activists: He forced incoming students to take a diversity course, adding thoughtcrime to the student code of conduct and promising to police student speech.

While LeBlanc defends academic freedom and viewpoint diversity in the Sunrise GW video, the university’s policies are another matter. It earns a “yellow light” rating from the Foundation for Individual Rights in Education, with most of its speech-related policies judged to encourage “administrative abuse and arbitrary application.”