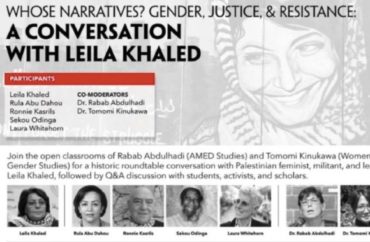 Two departments at San Francisco State University were scheduled to host a woman who hijacked two planes for the Popular Front for the Liberation of Palestine, which the U.S. designates as a foreign terrorist organization.

Organizers then moved it to YouTube, which stopped the event 23 minutes in for violating its terms of service, Jewish Telegraphic Agency reports.

While Zoom’s statement said the Leila Khaled event violated its terms of service, it mentioned “anti-terrorism laws” as the seeming basis for making that judgment. A civil liberties group challenged the legal analysis behind the decision.

The event was to be hosted by Arab and Muslim Ethnicities and Diasporas Studies and Women and Gender Studies. The subject was “gender, justice, and resistance.”

Dozens of pro-Israel groups, including the AMCHA Initiative and StandWithUs, told President Lynn Mahoney last week that Khaled’s invitation to speak to an “open classroom” was indeed “an endorsement of a point of view
and a political cause,” despite Mahoney’s assurance that SFSU was not taking sides.

While their letter claims that the professors who invited Khaled had intended to “indoctrinate” students with “propaganda consistent with their own political causes” and make them “foot soldiers,” the groups made two legal claims.

AMED Director Rabab Abdulhadi (below) has engaged in “blatant politicization of her classroom, conference hall and other professional spaces” in violation of two California laws on “misuse of SFSU’s name and resources for personal or political purposes, including for the promotion of a boycott.” That refers to the anti-Israel boycott, divestment and sanctions movement. 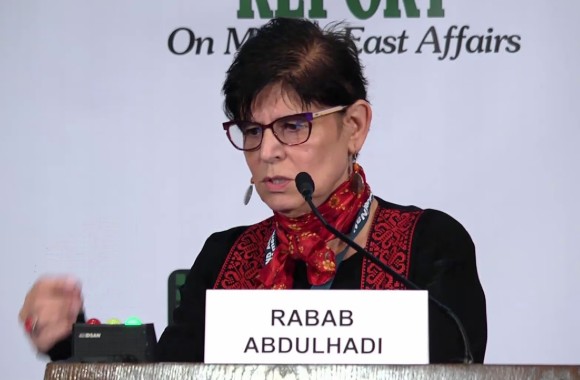 The Lawfare Project made more far-reaching claims in a Sept. 14 letter to Zoom, accusing the livestreaming service of “[u]nlawful provision of material support to designated foreign terrorist organization” through the SFSU event. It said Khaled is still a member of the U.S.-designated terrorist group, making Zoom liable under federal law for facilitating a prohibited event.

Federal law states that “knowingly” providing support for such an organization “shall be fined … or imprisoned” for up to 20 years, with “support” including a “service” such as Zoom, the letter said. SFSU and event hosts Abdulhadi and Tomomi Kinukawa, a women’s studies lecturer, could also “each be found liable for violating the statute by providing, and/or conspiring to provide, such material support or resources to Khaled.” (Lawfare sent a nearly identical letter to the Justice Department.)

Lawfare said it had an “intensive dialogue” with Zoom this week, according to JNS, leading Zoom Deputy General Counsel Lynn Haaland to release a statement apparently crediting Lawfare’s legal claims:

Zoom is committed to supporting the open exchange of ideas and conversations, subject to certain limitations contained in our Terms of Service, including those related to user compliance with applicable U.S. export control, sanctions, and anti-terrorism laws. In light of the speaker’s reported affiliation or membership in a U.S. designated foreign terrorist organization, and SFSU’s inability to confirm otherwise, we determined the meeting is in violation of Zoom’s Terms of Service and told SFSU they may not use Zoom for this particular event.

The legal claims in both letters are bogus, the Foundation for Individual Rights in Education said Wednesday.

The letter from dozens of pro-Israel groups wrongly cited a state election law that would be unconstitutional on its face if applied to academic speech, wrote Adam Steinbaugh, director of FIRE’s Individual Rights Defense Program. The second state law is flatly unconstitutional on its face because it requires advance permission from the university to use its name “anywhere.”

Noting that Republican Rep. Doug Lamborn called on the Department of Education to cut funding from SFSU if it hosted the event, Steinbaugh said he had found no “indication that Khaled will be compensated for her virtual appearance.”

That means the only “support” she’s receiving is the virtual forum, which is protected by the First Amendment. Even Khaled’s membership in an organization designated as terrorist is constitutionally protected, he said:

Universities should be places where students and faculty can discuss — and hear from — people whose acts or views may be controversial or unlawful. Students and faculty members must remain free to invite speakers — whether they agree with them or not — without fear of censorship or punishment by administrator, bureaucrat, or politician. The First Amendment extends a right not only to speak, but also a right to hear or receive information. This right makes no exception for people who have engaged in misdeeds, criminal activity, or membership in blacklisted organizations.

JTA reports that organizers asked SFSU Provost Jennifer Summit to help them find a new streaming host, saying it’s “obligated to defend us against the vilification and smearing by an Israel lobby that is troubled by and seeks to silence Palestinian narratives and scholarship, teaching and advocacy for justice in/for Palestine.”

Another Facebook post – apparently removed by now – said the event would go forward on Facebook Live. Abdulhadi, one of the faculty hosts, said on her own Facebook page Wednesday morning that “Facebook has taken down the AMED event page and disappeared the Leila Khaled webinar.”

A few hours later, Abdulhadi notified followers that the livestream was now on YouTube.

The event had about 900 viewers when YouTube pulled the plug, “abruptly ending when an old video of Khaled was being shown in which she defended her former activities,” JTA says.

“YouTube shut us down. If SFSU Administration has stood by us and if SFSU President did not join the Zionist chorus, we would not be here today,” Abdulhadi fumed Wednesday afternoon.

In response to their request for help finding a host, the organizers received “Radio Silence” from the administration, she wrote Wednesday night. “The question is why are Palestinian narratives exceptionalized and why SFSU president siding with Zionist defamation, silencing and bullying?”

Read the JNS and JTA reports.