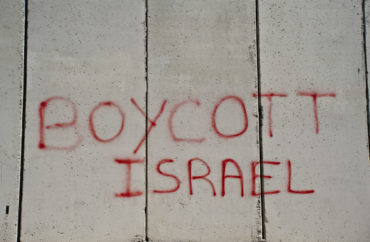 Over the past academic year, anti-Israel activists have suffered key losses on campuses across the country as “boycott, divestment and sanction” efforts have repeatedly failed to take hold at American universities and colleges. In what may have been a record year of failures for the BDS movement, at least eight provisions at major schools failed to secure the necessary votes of their respective student governments.

The failures continued up until the end of the semester. Last month The College Fix reported on Resolution 36 at Cornell University, a measure that was brought before the Student Assembly there. This resolution declared that the school held investments in several companies, such as Raytheon and Hewlett-Packard, that “profit from Israel’s military occupation of the West Bank and the Gaza Strip.” The resolution called for the school to “end its complicity with the Israeli occupation of the Palestinian territories.”

Debate on the matter was so intense that the vote was ultimately conducted by secret ballot. Representatives were afraid to vote publicly for fear of their safety; the assembly members had reportedly been fielding calls from reporters and think tank representatives during the course of the debate.

Though the student assembly approved the BDS measures, undergraduates in the audience were also allowed to vote on the measure, and they ultimately voted against it.

At the time, Cornell student Issac Schoor told The College Fix that the resolution’s failure “represents— first and foremost— the lifting of an incredibly unfair burden off the shoulders of the Jewish community here.”

Not all BDS initiatives are so hotly and closely contested. Earlier this year, the student government at Ohio State University “decisively rejected” an anti-Israel measure. The resolution demanded a university boycott of companies that sell to Israel, such as heavy equipment maker Caterpillar and hummus brand Sabra. It also stipulated a full boycott against Israeli universities, “including cancellations of currently invited speakers and visiting professors,” as well as an “end [to] existing programs or relationships with Israeli universities.”

Though the student government voted in favor of the measure on a secret ballot, a public vote saw its resounding defeat, with more than four times as many representatives voting against it as for it.

BDS has sometimes suffered multiple defeats at the same school. Six times over the past seven years, the student government at the University of California, Santa Barbara has attempted to pass anti-Israel resolutions. Each of those has failed. Sometimes students at that school have struck down BDS measures by voting. In one instance the measure failed to pass after a lengthy meeting of the student senate, at which the measure was extensively debated, ran into the early hours of the morning; when the government could not come to an agreement on the provision, numerous student senators simply walked out.

A subsequent meeting of the student government was shut down by anti-Israel student protesters, who were apparently upset that the proposed divestment measure was not radical enough.

At Columbia University in March, meanwhile, students voted down a BDS resolution following a “tense four-hour meeting.” Just days prior, the school’s president, Lee Bollinger, had spoken out in opposition to a prior effort to divest.

“I don’t support that…We should rarely, rarely make a decision not to do something unless there is a consensus in the campus that this is wrong. On the issue raised, there is not a consensus; there is a whole host of views about this,” he said, according to The Columbia Spectator.

The University of Maryland has also seen multiple anti-Israel provisions fail. Several years ago, the student senate scrapped a BDS resolution before it even came to a vote. This year one resolution did make it all the way through the senatorial process. The vote was scheduled to take place during Passover, a major Jewish holiday. That provision ultimately suffered a resounding defeat.

At Pitzer College this year, the College Council, composed of faculty, staff and students, actually succeeded in passing an anti-Israel measure, voting in support of a motion that suspended the school’s program with Israel’s University of Haifa. But the university’s administration ended up rejecting the measure.

Pitzer’s president, Melvin Oliver, said that the proposal would put the college in what he called an “unavoidably political position on one of the most controversial issues of our time.” After having “several months to consider [his] position on this matter,” Oliver decided that the college would not end its relationship with the University of Haifa. Oliver explained his stance in an open letter to the school.

“Just as the College Council exercised its right to make this recommendation, I, too, exercise my prerogative and make this decision squarely within our existing structure of shared governance,” wrote Oliver. He wrote that the measure, if implemented, would “[curtail] the academic freedom of those students who wish to study at the University of Haifa” and would be “counter to Pitzer’s core value of intercultural understanding.”

Following Oliver’s decision, the student senate promptly fielded a resolution demanding the president’s resignation. This effort also failed, this time at the hands of the student government itself, which ended up voting 20-12 against endorsing Oliver’s leaving the school.

The student judiciary declared that the boycott, divestment and sanction measure ran afoul of the “viewpoint-neutral” principle by which student fees must be allocated at public universities (the Supreme Court had previously ruled on this issue in 2000). The ruling also declared that the measure violated the constitution of the student government itself.

Some pro-Israel activists optimistic; others not so much

Representatives from two organizations that combat anti-Israel sentiment on campus, AMCHA and StandWithUs, expressed differing opinions about the recent string of BDS failures.

Tammi Rossman-Benjamin, the cofounder of AMCHA (Hebrew for “your people”), told The College Fix that, despite the recent failure of campus anti-Israel initiatives, anti-Israel groups like Students for Justice in Palestine are succeeding in their underlying goal of “anti-normalizing” Israel.

“They aren’t failing. They’re actually succeeding. Every attempt to bring BDS to campus is a BDS win,” she said.

“Whether the vote passes or not, the amount of anti-Zionist settlement that they manage to bring on campus around this BDS vote or resolution is enormous– and that’s the goal. This is all strategy. It’s all PR. It’s all a scam, and the scam is working.”

Rossman-Benjamin claimed that the boycott-divestment-sanction movement is given too much importance on campus.

“We have blown BDS out of proportion. We’re fighting BDS but BDS isn’t a thing, it’s just a tactic. It doesn’t make sense to put a lot of stock into looking at whether a vote passes or fails. For the students on the campus, particularly those students who are very upset about the BDS vote, the pro-Israel students, it’s meaningful for them.”

“If we think that it’s all about BDS we miss the bigger picture. BDS is just one little tactic in a siege ideology of hate towards Israel, the Jewish state, and ultimately the Jewish people. It’s about Jewish nationhood and Jewish self-determination.”

Max Samarov of StandWithUs expressed more confidence that stopping BDS initiatives on campus represents victory, or at least an opportunity to educate people about the larger issue.

“What’s important to realize is that the vast majority of people either don’t have a lot of information about [the boycott, divestment and sanction movement] or don’t have any strong opinion about it whatsoever,” he said.

“I definitely have lots of hope and see lots of opportunity to educate people and to keep the foundation strong.”