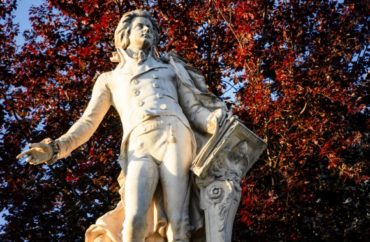 Goodbye Mozart and Beethoven, hello Lil Nas and Cardi B?

That according to campus documents obtained by The Telegraph, which reported that scholars are worried current lessons may be too focused on “white European music from the slave period.”

Scholars are reportedly concerned that teaching notation that has not “shaken off its connection to its colonial past” is insulting to students of color and they seek to diversify the curriculum to be more inclusive.

Yahoo News reports that the “professors further suggested that certain classical music skills – like playing the piano and conducting orchestral arrangements – ought not to be required because they structurally center ‘white European music’ and cause ‘students of color great distress.'”

But Oxford has denied reports that its scholars are considering scrapping sheet music to address “white hegemony” in music. An Oxford spokesman told the Washington Examiner that “there is no truth in the ‘sheet music’ claim.”

But some changes are in the works.

An Oxford spokesperson told Classic FM: “While retaining (and in no way diminishing) our traditional excellence in the critical analysis, history and performance of the broad range of western art music, we are exploring ways to enhance our students’ opportunities to study a wider range of non-western and popular music from across the world than is currently on offer, as well as music composition, the psychology and sociology of music, music education, conducting, and much more.”

In addition to diversifying its music curriculum, the classics faculty at Oxford have proposed the removal of Homer’s “The Iliad” and Virgil’s “Aeneid” from its classics degree pathway.

Oxford also would not be the first university to do what is called “decolonizing the curriculum.”

The music department at the North Carolina-based Meredith College has pledged to change the way it picks music to create a more inclusive curriculum.

The curriculum revision will promote the “inclusion of marginalized musicians” including an addition of the “contributions of BIPOC, women, and LGBTQ musicians.” BIPOC refers to black, indigenous and people of color.

More broadly speaking, “decolonizing the curriculum” is an ongoing trend seen across academia that seeks to replace traditional curriculums based in the Western canon with more obscure and specialized topics.

In January, University of Leicester’s English department faculty who teach medieval literature such as Geoffrey Chaucer learned their courses will be eliminated under a plan to swap in a “decolonised curriculum.”

At Yale, an effort to “decolonize” its English Department was successful a few years back. It took place after complaints that studying white authors “actively harms” students.

At the University of Notre Dame in 2019, a group of students demanded that courses be reworked to reduce the number of reading materials penned by white, male scholars in an effort to “eliminate the violence of only privileging white scholarship.”

And at Brown University, its Decolonization at Brown student group wants the school to remove two Roman statues displayed on campus, claiming they represent white supremacy and colonialism.