The occupation of Syracuse University’s Crouse-Hinds Hall continues into a new week, with student protesters alleging they have been denied food and saying they “fear for their lives” because of the campus police presence.

The #NotAgainSU sit-in, led by black students, is in response to multiple incidents of “racism, anti-Semitism and homophobia” on campus since November. The group has issued numerous demands over the last few months, including the right to have a roommate of the same race, a “unified, required” curriculum on “anti-racism,” and most recently the resignations of Syracuse President Kent Syverud and other officials.

Over 30 students were suspended for their occupation of Crouse-Hinds last week; however, President Syverud lifted the suspensions in less than 24 hours.

The Daily Orange reports the Crouse-Hinds occupiers complained that the university prevented them from receiving “food, medicine and hygiene products.” One protester said “We felt like animals. We felt like prisoners.”

Senior Associate Vice President for University Communications Sarah Scalese denied the allegations: “There was no intention at any time to keep student protesters from accessing food, medicine or other necessities. The students were able to leave the building at any time to obtain food and other necessities and chose not to do so.” 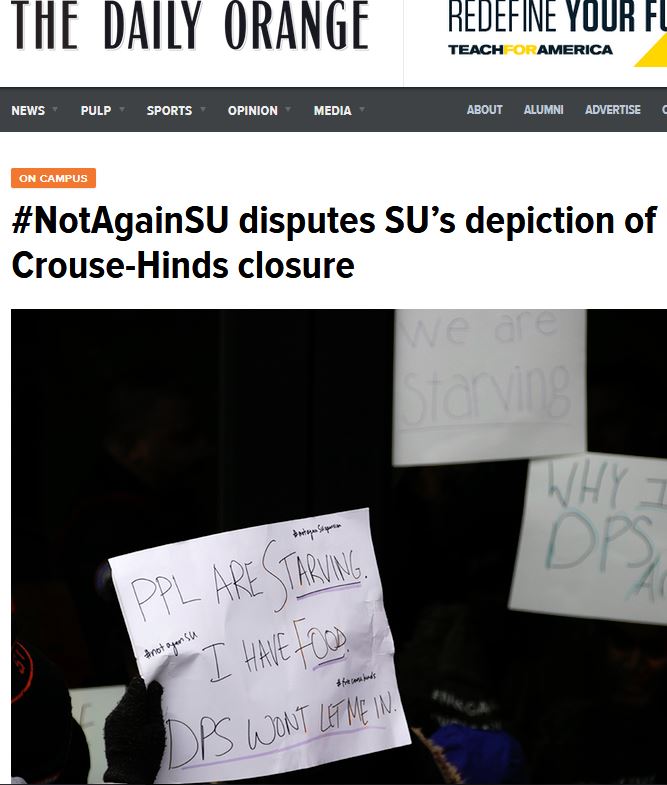 Another occupier said protesters “feared for our friends’ lives” and “felt unsafe” due to the actions of campus cops.

Scalese said the protesters’ ever-changing demands have made the situation “challenging.” A week ago, #NotAgainSU “added six new demands, revised five and retracted one.” However, the D.O. reports that as of Sunday evening, the protesters indicated they were willing to meet and negotiate with Syracuse officials.

“We have only been in communication with admin when they choose to make themselves available to us. There has so far been no protocol for the admin that indicates how and when we can communicate with them,” an occupier told the paper. Another said #NotAgainSU has been “consistently caught off-guard” by administrators as they pop in “unannounced to deliver conclusions made during the private meetings.”

Earlier today, Syracuse officials apologized for “racial profiling” as some students who received suspensions last week weren’t actually part of the Crouse-Hinds occupation. At least two of them, however, had joined a sit-in back in November. (It’s now “racial profiling” when members of “a movement led by Black students” who’ve protested previously are mistakenly penalized?)