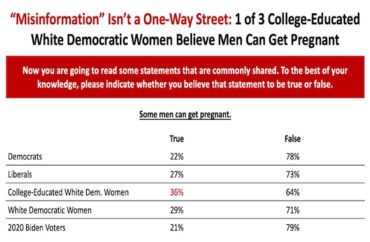 A recent survey asking respondents if men could get pregnant found that over one-third of college-educated women affiliated with the Democratic Party responded “true.”

In a graphic posted to Twitter on September 7, the WPA Intelligence poll told participants “Now you are going to read some statements that are commonly shared. To the best of your knowledge, please indicate whether you believe that statement to be true or false.”

For the statement “Some men can get pregnant,” 36 percent of white Democratic women with a college degree replied “true.”

In comparison, 29 percent of the same demographic without a college degree replied similarly, as did 22 percent of all Democrats.

WPAi Managing Director Conor Maguire told The Daily Wire that “Overall, few Americans think men can get pregnant. But with 36% of a core Democratic constituency (college-educated white Democratic women) and one out of five Democrat voters believing this, one can see why Democratic leaders coddle the radical gender theory movement.”

Misinformation isn't a one-way street. One out of five Democrats believe men can get pregnant, including:

The College Fix has documented many such instances of that movement. For example at Scotland’s Edinburgh Napier University, a midwifery workbook stated that men could give birth through their penises. The New York Department of Health apologized for a Harvard Medical School professor who had referred to white women, but not black or Hispanic women, as “birthing people.” The professor had “inadvertently gendered” the latter two, the department said. (Indeed, Harvard Med School has ditched the term “expectant mothers” for “birthing people.”)

And the academy actively enforces use of the “correct” terminology. Last year, a University of Florida adjunct was the subject of a “bias” complaint for allowing a student to opine that transgender women are not actually women. A transgender activist demanded an investigation into a University of Dallas professor for criticizing President Biden’s appointment of Rachel Levine to the Department of Health and Human Services. And at the University of Michigan, trans activists reported a lesbian craft group for its “discriminatory” group name of “Lez Get Crafty.”