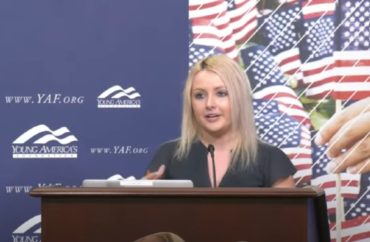 The Young Americans for Freedom chapter at Saint Louis University will fight back after the student government denied its request for official status.

Young America’s Foundation spokesperson Kara Zupkus (pictured) told The College Fix that the national organization is assisting with “a public call-to-action campaign against the school to persuade the administration” and is guiding the chapter on continuing activism without a recognized status.

She told The Fix that the denial of YAF clubs happens “pretty frequently.”

“[W]hen student governments are left in charge of this decision-making, they cannot keep their ideological biases out of it –and often go on power-hungry strikes against conservative students,” Zupkus said.

The Committee for Student Organizations told Nicholas Baker, president of the SLU chapter, that it had concerns surrounding “the overall inclusivity of the organization.”

“The committee also did not understand how your organization can be both non-partisan and conservative,” an email, shared by YAF on its website, stated.

The email did not give examples, but YAF has previously battled the university when it hosted Daily Wire commentator Matt Walsh with the help of SLU College Republicans.

Students also wanted Walsh’s speech canceled, due to “hate speech” concerns, though the event went on, changing venues several times along the way.

The Fix emailed SLU’s student government and the campus media relations team for comment on the decision and the requirements to be a student organization. No responses were received to multiple emails sent in the past three weeks.

Baker, the president of SLU YAF, previously said he plans to continue his fight for freedom on campus. The university also recently rejected his request to hang American flags in the classrooms.

“It seems like they are trying to play a waiting game until we give up,” Baker said. “But we are not going to give up.”