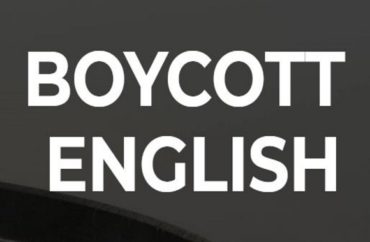 Students at Williams College have launched a boycott of the entire English Department, claiming the curriculum is “whitewashed” and its scholars “racist.”

Joined by alumni and others, the “Boycott English” effort calls “on the students of Williams College to boycott the entire English Department,” according to the activists’ lengthy online missive.

Their main complaints include allegations of scholars using the N-word, a curriculum that prioritizes white authors over authors of color, and claims that professors of color are not given tenure at the private and preppy Massachusetts institution.

“As such, we have no choice but to call for an indefinite boycott of all English Department classes (ENGL) that do not engage substantially with race,” the activists’ online manifesto states.

“A token assignment of ethnic literature in an otherwise whitewashed syllabus is not enough. Refusing to enroll in English classes is one way that we can create the pressures necessary to promote change,” it states.

Much of the contention in the activists’ online boycott declaration centers on two “black queer feminists” at Williams who left earlier this year, citing vague allegations of microaggressions and “violent practices” at the school as the reasons for their departure.

Another complaint by activists centers on reaction to the two scholars’ departure.

In particular, Dorothy Wang, an Asian professor who has disaffiliated from the English department because of its supposed “longstanding history of hostility toward faculty of color,” got in an argument last spring in a campus hallway with Kathryn Kent, chair of the English Department, over the issue.

Kent, who is white, had allegedly “raised her voice” against Wang, which some students took as an example of “structural racism,” prompting calls for Kent to be fired.

(A reliable source tells The College Fix Love and Green had been on paid leave during their hiatus.)

Writing on his popular blog Why Evolution Is True, University of Chicago Professor Jerry Coyne notes he’d be more sympathetic to the activists at Williams “if I thought any of their accusations were true, but, from what I know, none of them are. They are confections of an Outrage Culture perpetuated and coddled by the Williams administration and many of the faculty.”

Coyne, who has written extensively on the ongoing situation at Williams, also took the time to debunk the activists’ allegations spelled out in what he called their “Marxist-like manifesto” to boycott the English Department.

“The list is what’s known as ‘fake news.’ As I discussed in an earlier post, the oft-claimed ‘mass exodus’ of faculty of color didn’t exist. Those faculty left at the same rate as did white faculty,” Coyne wrote.

The call to boycott the English Department is the latest in a lengthy string of various tensions that have festered at the elite college, where tuition is $57,000 annually.

In April 2019, a Williams College student government meeting was disrupted by several black-activist students who yelled at the group for what they said they perceived as a lack of respect from their white peers, with one student saying “to be here is like sucking white d*** every f***ing day.”

The college’s recent history also includes speaker disinvitations, but Williams this past summer rejected installing sweeping free speech principles for the campus. The move came after it devised plans to ask students not to invite speakers who “would offend minority students.”

Last spring, the student government refused to recognize a pro-Israel student group, forcing administrators to step in and overrule the decision.

Also last spring some student activists issued a list of demands that included “reparation and reconciliation to Indigenous peoples,” nearly $50,000 in additional diversity funding, segregated spaces for black and queer students, free weekend faculty-staff shuttles to New York and Boston, a scholar who could teach on “fat studies,” and many other requests.

In 2018, the school canceled a play because it might harm black people.

Controversies have been so bad at the school it’s been compared to the notorious Evergreen State College, which gained national headlines a few years ago for asking white people to stay off campus for a day.

Some faculty at Williams, such as evolutionary biologist Luana Maroja, have publicly sounded the alarm at the totalitarian nature of the school’s environment, challenging students to provide evidence of their unsubstantiated claims that “violent practices of racism occur daily” on campus.

And Williams College Professor Steven Gerrard wrote an op-ed for Bloomberg in September 2019 headlined “The Rise of the Comfort College” in which he noted that his efforts to help install sweeping free speech principles at Williams drew student protesters who labeled him “Enemy of the People.”

UPDATE: This article has been updated to note the two “black queer feminist” scholars who left Williams College earlier this year have returned to their jobs this fall semester.