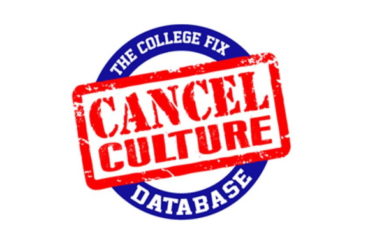 Campus cancel culture continued to be a force to be reckoned with in higher education, with 85 victims of the woke mentality and another 47 attempted cancelations over the last 12 months.

In sum, The College Fix’s Campus Cancel Culture Database tracked a total of 132 examples of the weaponized phenomenon, an average of more than two incidents per week in 2022.

“For those who think cancel culture was just a fad, it’s not, and we’ve got the receipts,” said Jennifer Kabbany, editor of The College Fix. “Campus crybullies — and the administrators who enable them — continue to wreak havoc on academic freedom and free speech.”

The database was launched in September 2021 with more than 1,400 entries and currently sits at 1,617 entries.

It defines cancel culture as any effort by people or groups to identify someone or something as offensive or unacceptable and seek in some way to censor or punish the transgressor or item.

The database tracks and quantifies both successful cancelations as well as attempted efforts, which can still have a chilling effect on freedom of thought.

Some of the most high-profile cancelations over the last year include:

• a New York University chemistry professor who was fired for tough teaching;

• a mob of demonstrators who shouted down a Q&A with incoming University of Florida President Ben Sasse;

• left-wing rioters who forced Tomi Lahren into hiding, ending her speech at the University of New Mexico;

• State University of New York at New Paltz students kicked out of a sex abuse survivors group over their Jewish identity;

• the successful protest that prompted Supreme Court Justice Clarence Thomas to back out of teaching a law class at George Washington University;

• Texas State University’s axing of the “Bluebonnet Lady of Texas” dorm name due to her Daughters of Confederacy link;

• a top female scientist who lost her university position over her 13-year-old “Michael Jackson” Halloween costume;

Building names and other monikers also took a big hit in 2022 with nine cancelations, including the decision by some schools to remove the word “women” from clinic names to promote diversity.

Several paintings also got the toss, including a portrait of Robert E. Lee from West Point and a depiction of old white men smoking cigars mothballed at from Leiden University.

Tenured professors remained under fire when they stepped out of line. Longtime Princeton University classics Professor Joshua Katz was fired in May, ostensibly for not cooperating with a probe of his sexual relationship with an undergrad 15 years ago. But the truth was he offended the Black Lives Matter crowd.

Convocation speeches also served as targets, with two shut down this year, one at Marquette and another at the University of Pennsylvania. In both cases, it was leftist protesters making various demands.

And it wouldn’t be another year gone by without investigative journalist Andy Ngo in Antifa’s crosshairs. The group and its supporters were able to effectively get his “Extremism in America” speech shut down at Dartmouth in January.

There is one silver lining to report in this campus cancel culture debacle we continue to chronicle. Cornell University’s decision to remove a bust of Abraham Lincoln from one of its libraries in 2021 was met with so much outrage that, earlier this year, administrators returned it to campus, and even placed it in a more prominent spot.

The lesson may be that if more people stood up against cancel culture than the squeaky wheels who push it, fewer things would be memory holed on campus.

MORE: The College Fix’s Top 10 most outrageous stories of 2022